Although it was written in the 1930s, The Children's Hour's sad storyline about how gossip and prejudice can ruin lives is surprisingly relevant in the age of social networking and teenage suicides. Setting the scene in a girls' boarding school in New England, the first half is a bit wearing, primarily because two of the central characters are very irritating people. Although Bryony Hannah plays Mary, an anarchic and selfish schoolgirl, with vigour, her acting can get repetitive and she doesn't yet have the charisma or the voice to dominate the stage.  One of the school teachers, played by Carol Kane, is also a self-centred and annoying character with few endearing qualities.  Moreover, the set, with its endless clapboard panels, is fairly simple and unchanging. Even the move from the school to the house of Mary's doting grandmother doesn't seem to prompt a substantial change of scenery.


Engaging and emotional
Still, the play comes to life in the second half when Keira Knightley and Elisabeth Moss, playing the wronged co-owners of the school, take centre stage. They both give engaging and emotional performances with Knightley adeptly switching between simmering restraint, passion and outrage, while Moss' performance is full of pathos and bitter humour. But Tobias Menzies plays Dr. Joseph a bit too safe, while Ellen Burstyn's portrayal of Mary's misguided grandmother can seem rather lackluster in comparison with the torrid Knightley and Moss. As a result, the audience may struggle to fathom why the old lady puts such faith in the word of the habitual liar Mary. Carol Kane's character also makes an unwelcome return in the second half. Her whining self-pity is well-acted, but may have you wanting to punch her lights out.

One of the few restaurants in the Port Olimpic not aggressively courting tourists and business travellers, Tapas Locas has a laid-back, laconic air. If you ignore the tarpaulin walls, the patio heaters and the television screens, the interior is reasonably attractive. Moreover, the food is good value. For 15 euros, you can gorge on the very generous "Paella Menu". First up is a plate of mixed starters, such as patatas bravas with some creamy sauces, a salad, a slab of tomato bread and a ham croquette. You can choose from several main courses, including a respectable sea food paella, served with a couple of king prawns and mussels mixed in with a satisfying pile of rice. The hungry can round the meal off with a desert, such as the large and tasty tiramsu, and this menu even includes a glass of mediocre wine (both the red and white seem to be chilled). Service is friendly, but don't go too early. Like many Catalan restaurants, Tapas Locas can be pretty empty before 9pm. 7/10 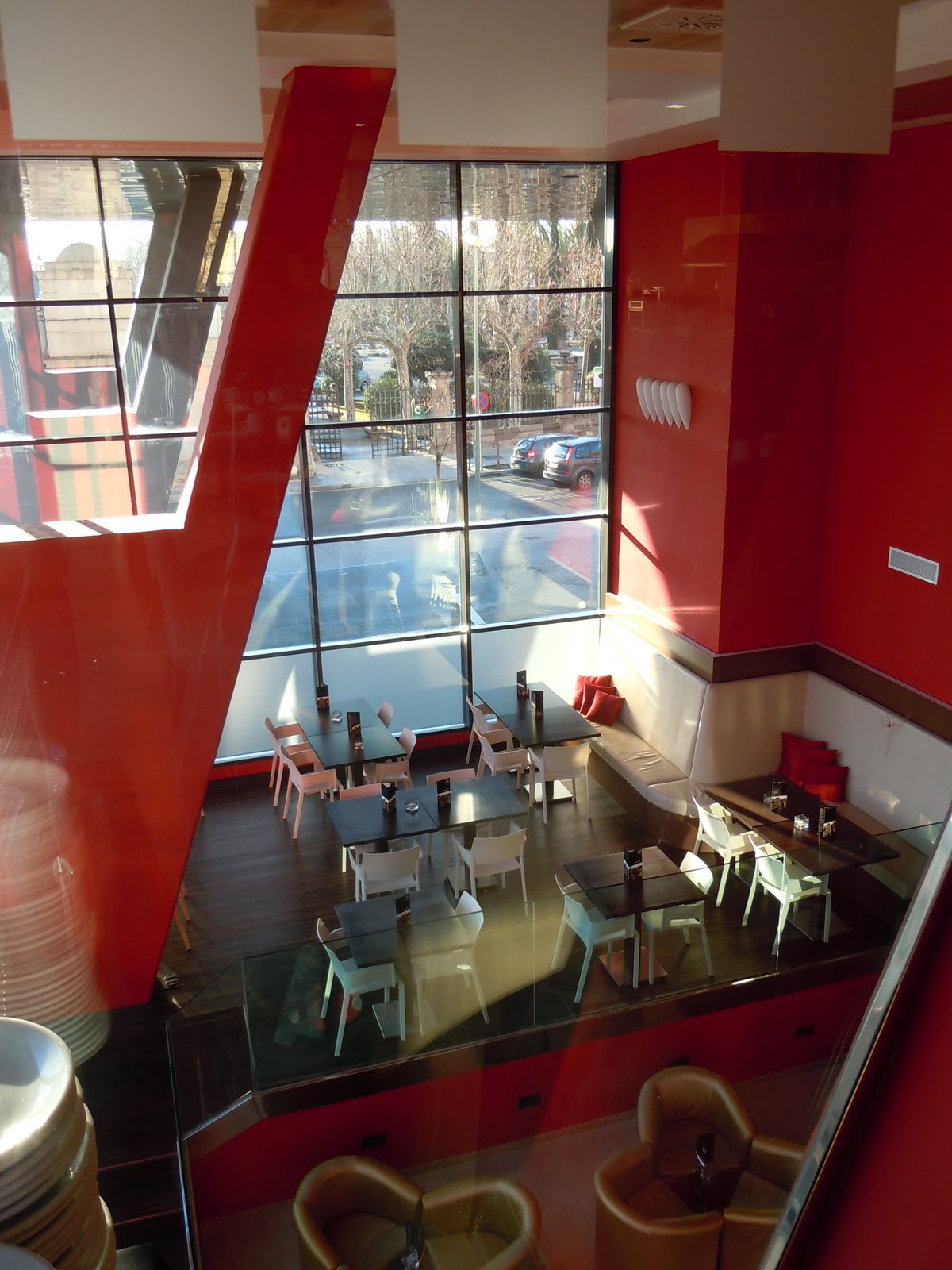 A boxy, modern hotel in an unusually featureless part of Barcelona, GBB Hotel 4 is well located for the beach, but not much else. Situated north east of the city centre, this one-year-old mini tower block overlooks a large, multi-storey graveyard and some of the upper floors have distant sea views. The compact single rooms, with tasteful prints of modern art and dark laminate wood floors and furnishings, offset by bold splashes of colour from the dark red chairs and matching cushions, are comfortable enough. But it can be difficult to get either the high-tech air conditioning or the Internet access to work properly.  The en-suite bathrooms are contemporary, but characterless. More appealing is the open and airy first floor dining room, which overlooks the reception lounge painted bold red and framed by sloping pillars. The buffet breakfast, which has plenty of choice, features tiny croissants, pastries, cold meats, cheeses, fruit, yoghurts, fruit juices, bread and toast. You can choose from filter coffee or the slightly-sickly machine coffee. The hot food can include greasy bacon, small rubbery sausages and cool, congealed scrambled egg. There is something for everyone, but it is more fuel, than fine food. GBB Hotel 4 also has a business centre and a fitness suite, but there better places to stay in Barcelona. 6/10

A smart gastropub in a smart neighbourhood within walking distance of Victoria station, the Thomas Cubitt has both a downstairs bar and an upstairs restaurant. In the bar, you eat at bare wooden tables set with sumptuous white napkins and quality cutlery, while the professional waiters will bring drinks to you. The panelled wooden decor is traditional, yet stylish, and the floor-to-ceiling pained windows are welcoming. Although the bar menu isn't very adventurous, offering cumberland sausages, pork belly, salmon and other standard pub fare, the food is generally nicely done. One of the specials, the steak pie with well-mashed turnip (£13), for example, is rich and flavoursome. But the sizable gap between the light fluffy pastry top and the meat means this dish may not fill you up. Among the side dishes, which are a hefty £4 each, the chips can be a bit too crispy and the broccoli a tad overcooked. A service charge is added to your bill and even a one-course meal could end up being pricey. Still, the Thomas Cubitt attracts plenty of well-heeled punters. 7/10