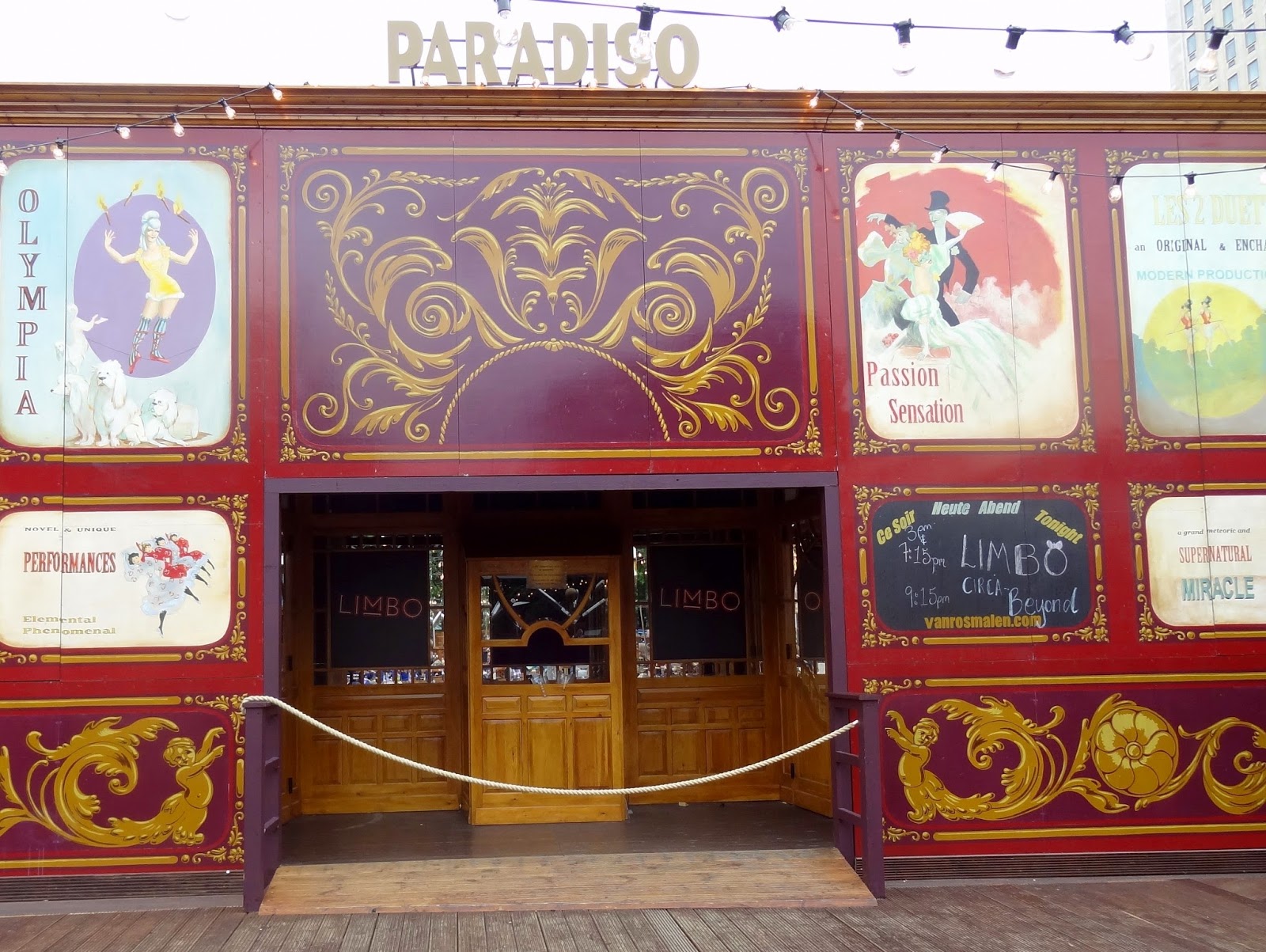 Sultry, soulful and sensuous, Limbo is an edgy and intimate circus show in the best traditions of Cirque de Soleil. It is performed in an elaborate replica of a 1920s Spiegeltent (a wooden temporary structure originating in Belgium) erected on London's South Bank. The audience sit in a circle in half-a-dozen rows around the stage and even the cheapest seats are close to the action.  On the outer edge, there are tables with benches.

The title refers to an existence between heaven and hell. As the eclectic bluesy band warms up,  Jonathan Nosan, a disturbingly bendy and limp contortionist, arches his back right over, so that he is walking on all fours the wrong way up. He is seemingly under the control of the inscrutable ringmaster and musical director, Sxip Shirley. Dressed all in white with curly, wiry hair, Shirley directs Nosan around the stage with mechanical sounds produced by his microphone and harmonica.

Nosan's fellow performers then proceed to show off their talents. Boyish Frenchman Mikael Bres surges up a pole in the centre of the stage like a monkey scaling a tree and then wraps his legs around it and falls like a stone, stopping abruptly when his head is a few inches from the floor. The extraordinarily athletic Danik Anishev, in chains, does one handed-handstands, hopping from the top of one pole to another - an amazing feat of strength. The charismatic and unendingly cheerful Hilton Denis does some fleet-footed tap dancing. With flames springing up around the stage, the scantily-clad Heather Holliday swallows swords and breathes fire with careless abandon. 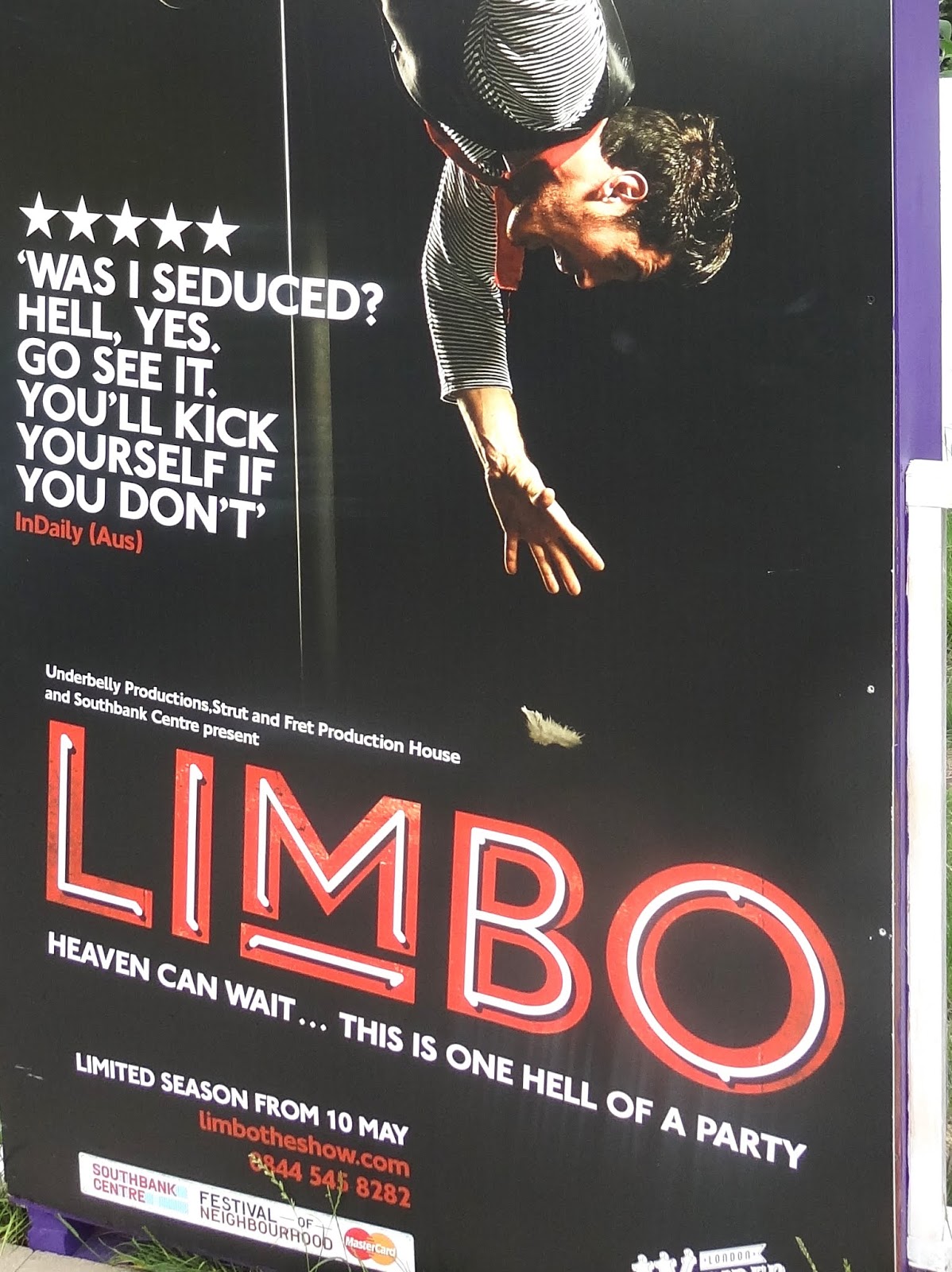 Occasionally, the specialists team up: In one of the most entertaining scenes, Nosan and Anishev attach themselves to tall bendy poles and then swing around the tent narrowly avoiding each other and the audience. Playing the clowns, Evelyne Allard and Nosan start passionately taking their clothes off, but there is always another vest and another pair of pants. One scene features inventive juggling with canes and hats. In another, the performers seem to appear and disappear from inside boxes. Most of the acts are performed with panache - quirky facial expressions and gestures give Limbo personality.

Limbo can also be genuinely erotic. The well-defined men are often bare-chested, while the equally fit women also have a lot of flesh on show. The lighting is artful with bulbs swinging around the stage and narrow spotlights creating a kind of cage. The band floods the Spiegeltent with enigmatic music, combining a harmonica,  an accordion, a huge bassoon, trumpets, drums and many other instruments, some conventional, some unrecognisable. All the performers seem to be able to play an instrument or sing: Being a high class gymnast, dancer or acrobat is clearly not enough. This versatility is impressive, but  is also Limbo's only real weakness - when a performer is out of their comfort zone, the intensity can drop a notch or two.  If there is a plot, it is hard to fathom - the meaning of the flurry of white feathers, for example, isn't obvious. But it doesn't matter - it is hard to take your eyes off the stage. At times bewitching, at times raunchy, at times thrilling, at times idiosyncratic, Limbo packs a lot into 75 minutes. 9/10