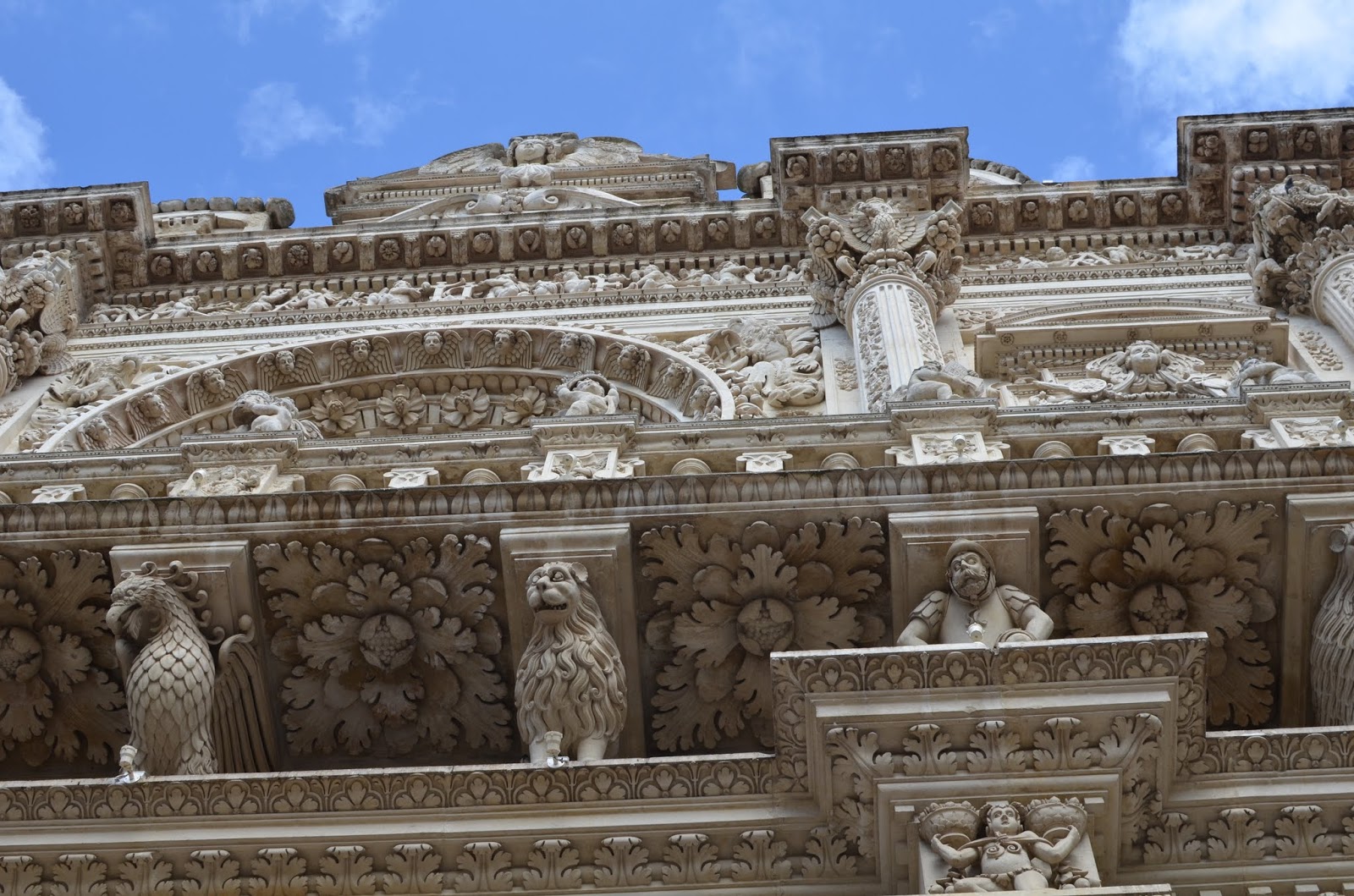 Heralded as Baroque's answer to Florence, Lecce is a glistening jewel of bizarre architecture in the sun-drenched deep south of Italy.  You can park cheaply quite near one of the grand gates to the seventeenth century heart of the city - an atmospheric maze of narrow, stone-paved streets with a wealth of well-preserved buildings. At Lecce's heart is Piazza Sant'Oronzo. One side of this yawning square is dominated  by a sunken and substantial Roman amphitheatre, which has about a dozen rows of stone terraces overlooking a pit, still used for performances.  The square also has what looks like a modern reconstruction of a medieval tower, ornately carved and fitted with large glass windows,  plus a very substantial statue of a bishop blessing his flock atop a column towering over the buildings. Unfortunately, the garish facade of a branch of McDonalds mars the historic harmony. Not far to the north is the Baroque masterpiece Basilica di Santa Croce, which has an extraordinarily lavish facade with just about every inch carved with flowers, fruit, mythical creatures, cherubs and much else - the stonesmiths have taken full advantage of the local, malleable stone. Both the overall effect and the many, many intricate details will hold your gaze. The stately white interior is also worth a look. Anywhere else, the adjacent Palazzo Della Provincia would be a landmark, but it is totally overshadowed by the Basilica. Behind the Palazzo, across a busy ring road, is a pleasant park, which fills up with local families in the evenings.


Beautiful and beguiling
Besides the Basilica di Santa Croce, Lecce has several other grand churches with extravagant Baroque facades, each with with a frenzy of intricate carvings of animals, plants and other religious iconography. If you are lucky, one of them may be filling up with elegant locals dressed in their finery for a wedding. The city's cathedral overlooks the Piazza Del Duomo, an atmospheric open space enclosed by sumptious baroque buildings, one of which has a soaring bell tower, visible across Lecce. Inside the duomo, gold leaf decorations sprawl across the lavish nave. It is also well worth getting lost in the labyrinth surrounding these squares, which are a parade of handsome buildings with wrought iron balconies, vintage lamps and creamy stone facades that glow pale orange in the early evening sunlight.  Lecce hasn't been spoiled by tourism and in some of the back streets, you can still see stone masons and other craftsmen beavering away in their workshops. Lecce is a beautiful and beguiling city. 9/10