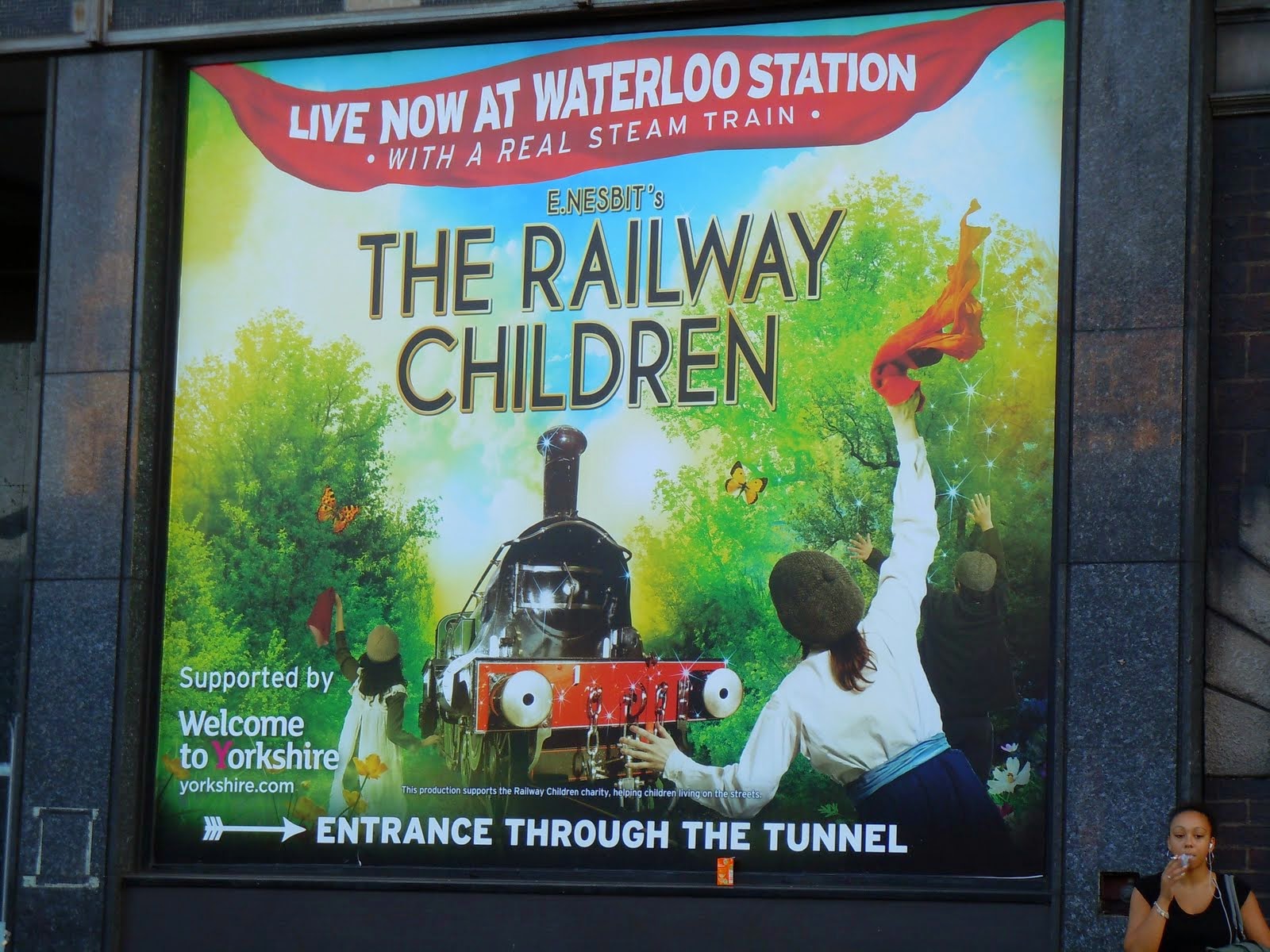 Set in the former Eurostar terminal at Waterloo station and featuring a 140-year-old steam train, this production of The Railway Children is an extraordinary piece of theatre. The long narrow stage straddles a section of track, flanked on each side by 500 seats rising up 11 rows. The glass and blue steel frame of the station is completely hidden by an elaborate and atmospheric set with a jet black backdrop. Two replica Edwardian signal boxes are positioned at either end of the stage, a wooden footbridge rises over the track and vintage suit cases are strewn around the floor. As the action moves from the children's London home to their rented cottage in the Yorkshire countryside, the set changes with the help of portable platforms, which bridge the track, to form rooms. These platforms, bearing furniture appropriate to the scene, are shunted up and down the track by stage hands dressed as railway workers. The tunnel, where the children rescue an injured school boy, is imaginatively created using semi-opaque black blinds, while the cast's Edwardian costumes are also elaborate and evocative.

Stirling Single No. 1
For most of the first half of the play, trains running down the track are represented by seats mounted on the mobile platforms, accompanied by a rolling chute of steam and the whistle and rattle of a train approaching, passing and fading away. But just before the interval, the Stirling Single No.1, makes its appearance. Built in 1870, it is a beautiful beast that will have the hairs tingling on the backs of the necks of railway enthusiasts, while the ancient wooden carriage it pulls is the height of elegance. Unfortunately, steam doesn't come out of the Stirling's funnel as it bears down on Roberta, the eldest of the railway children, frantically waving her red petticoats. Although this is supposed to be the most dramatic scene of the play, the train doesn't get remotely close to hitting Roberta. In fact, one of the weaknesses of this production is a lack of dramatic tension - the action moves fast, trotting through the scenes almost too quickly. Moreover, in the Sunday 5pm show, some of the acting seems to lack energy and edge, perhaps reflecting the difficulty of holding an audience on such an elongated stage or the fact that it is the second performance of the day.

Charm and charisma
Adults play the part of the children, sometimes narrating the story, sometimes acting it out. The most enjoyable performance is by Sarah Quintrell, playing Roberta, who has an appealing old-fashioned charm and charisma. She is central to the success of the most emotionally-charged scene in which she persuades the impoverished Mr. Perks to overcome his pride and accept that birthday presents from his neighbours aren’t a manifestation of pity or charity. Nicholas Bishop, playing brother Peter, also tries to keep the tempo up, but the bickering with his younger sister, Phyllis, is a bit tiresome. Louisa Clein's portrayal of Phyllis can feel one-dimensional and clownish, while Marshall Lancaster's Mr Perks often seems to be going through the motions.

A commercial ruse
Still, The Railway Children's unique set is stunning, justifying the outlay for a ticket, especially if you pay £20 for one of the seats in row K, which aren’t markedly inferior from the £60 seats in row A. But if you sit at either end of the platforms, you can feel cut off when the action moves to the other end of the set. There isn't a huge amount of legroom, but the seats are comfortable enough for the two hour running time, which is split by a 20 minute interval. Although The Railway Children's website promises children's activities, such as a train ride and a model railway, these extras are pretty lame and seem to be a commercial ruse to get you along early, so you can splurge on the expensive merchandise, drinks (a small cup of tea is £2 and a bottle of beer £4) and food in the small, drab cafes and bars. 8/10