EasyJet now allows you to check-in online and then drop baggage in at dedicated desks at the airport, but you may still end up standing in long queues. Ironically, if you cut it fine, you might be able to walk straight up to a dedicated check-in desk for the next departing flight, but then you run the risk of not making it through the sometimes-lengthy security queues. Even paying extra for so-called speedy boarding, doesn't guarantee a speedy passage to the plane, but you might get a window seat and some spectacular views over The Pyrenees during this short flight. On board, the food and drinks are mediocre and pricey, while the passable in-flight magazine might kill 30 minutes or so. For the return leg, be aware that the terminals at Barcelona airport are being revamped right now and easyJet's check-in desks are a good 10 minute walk from the main international terminal building. Once you have dropped in your bags, you then need to walk back again, this time inside the terminal building, until you eventually reach your gate. If the flight is delayed, there are plenty of cafes and shops in Barcelona airport, but you'll pay a premium for any presents you buy here. 5/10

Camberwell Cars is a responsive and flexible minicab company, which charges a reasonable £42 for the journey from Herne Hill to Gatwick at 5am on a Sunday morning. Even at that time, there is traffic on the A23/M23 and the journey still takes best part of an hour.  7/10 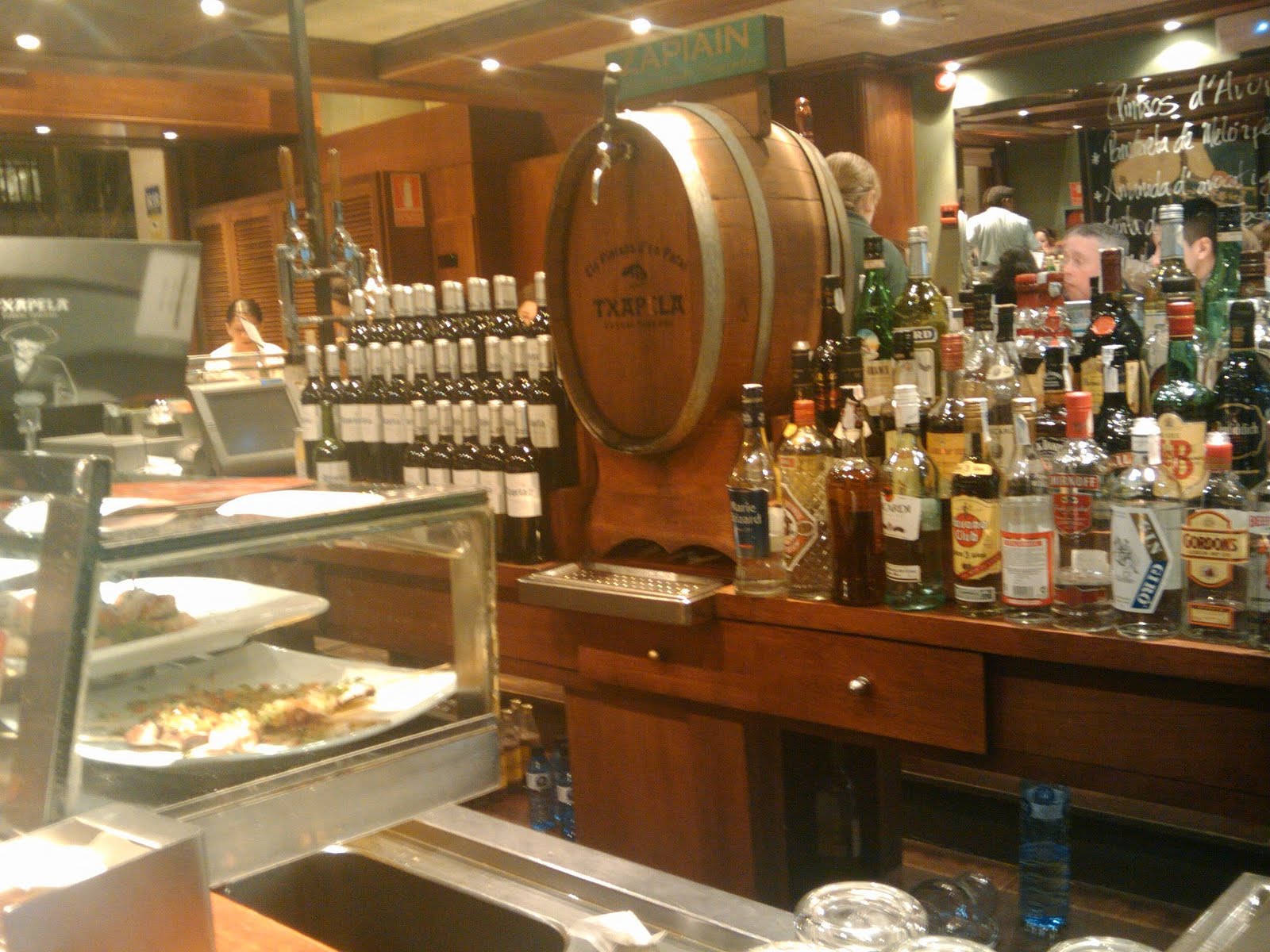 A big, bustling tapas bar on Barcelona's upmarket shopping street, Txapela manages to just about strike the right balance between luring in the tourists and retaining a modicum of authenticity. You can perch on one of the atmospheric stools around the bar, where you might find the draught from the wide open doors a bit much in winter, or take a more comfortable table upstairs.  When you sit down, you get a paper mat with small photos of the 51 tapas dishes, complete with prices (most cost between 1.4 and 2 euros). An accompanying English menu describes what they all are. From the bar, you can inspect the cold dishes in glass cabinets, rows of spirits bottles, a large wooden barrel and the hive of activity in the noisy open plan kitchen. Many of the dishes, which often include a piece of non-descript bread, can be a bit tired and dry. As a rule, the salmon and anchovy-based bites tend to be fresher and more appetising than the meaty snacks.  Pint-sized glasses of weak, but refreshing, Spanish beer cost 3.65 euros. The service is lively, but often inattentive and slow. Txapela doesn't have to work very hard to pull in the punters and it shows. 6/10 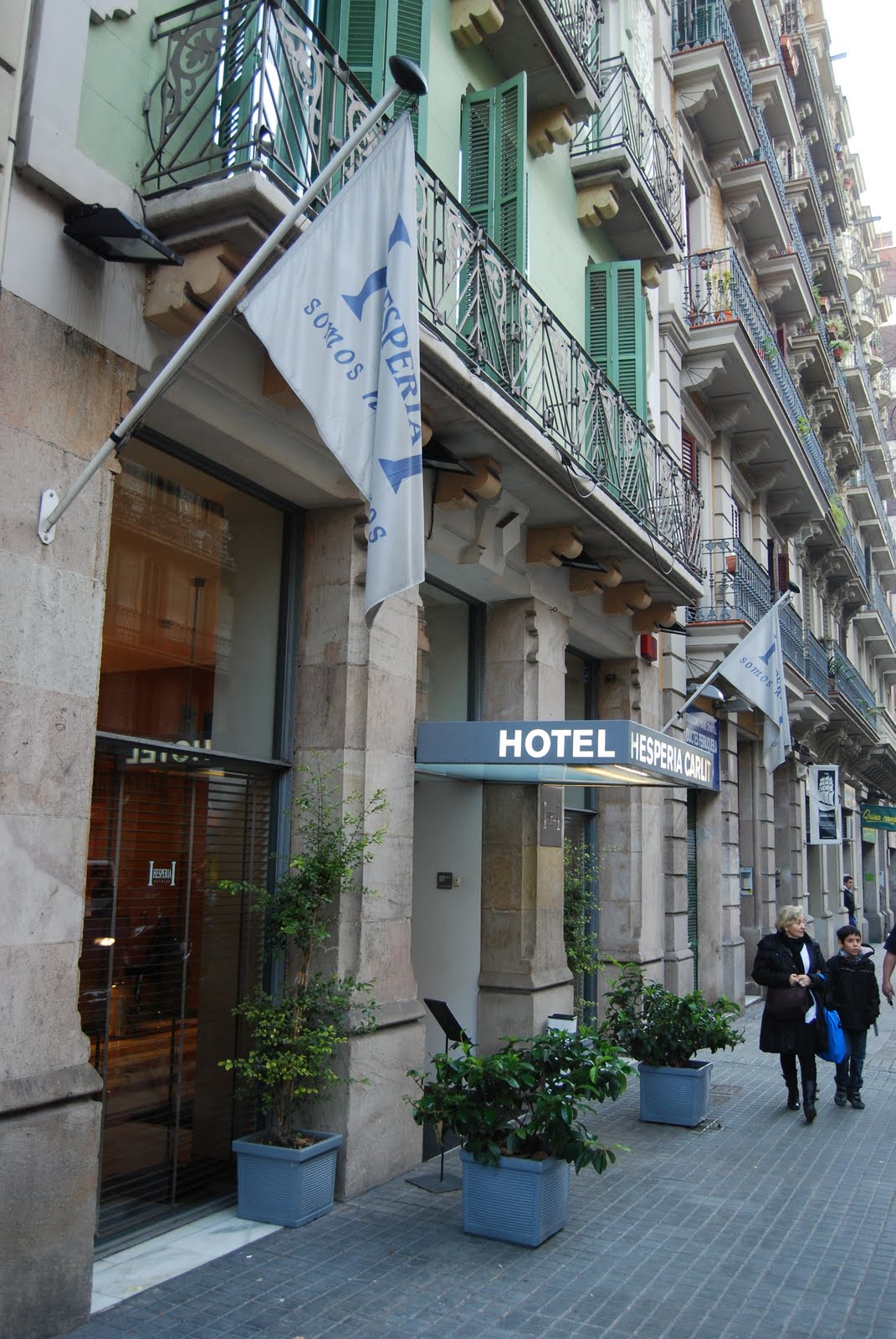 About half way between the Placa Catalunya and the Sagrada Familia, Hesperia Carlit is well-placed for walking to many of Barcelona's sights, but there isn't much in the immediate vicinity. Despite a modest three star rating and tariffs to match, this hotel's 2002 refurbishment slavishly followed the Barcelona fashion for kitting out an elegant nineteenth century building with funky, modern furnishings. But the injection of style can't disguise how cramped this hotel is – the rooms have just enough space to enable a guest to walk around two sides of the double bed. A clouded glass window might overlook the small internal atrium, decorated with large stones, rather than the outside world. The en-suite bathrooms are fitted with showers, rather than baths, but are well-equipped with toiletries, towels and bathrobes. Moreover, there is a good safe in the wardrobe and broadband Internet access is available via a cable provided by reception.

Resorting to earplugs
But none of these features compensate for the paper-thin walls, which might have you resorting to earplugs to get some sleep. If you can't nod off, you can watch one of the handful of English language channels on the clunky, old-fashioned telly, which is at odds with the rest of the decor. The buffet breakfast, in the downstairs basement, isn’t bad – there is an array of cold meats, cheeses, pastries, bread rolls, plus yoghurts and a mixture of tinned and fresh fruit. There is even a small selection of mediocre hot food – wafer thin slices of bacon, dense scrambled egg and mini frankfurter sausages. But the café con leche isn't much cop, which is often the case in Spain. Perhaps the best thing about Hesperia Carlit is the well-turned out, friendly and helpful reception staff. 6/10 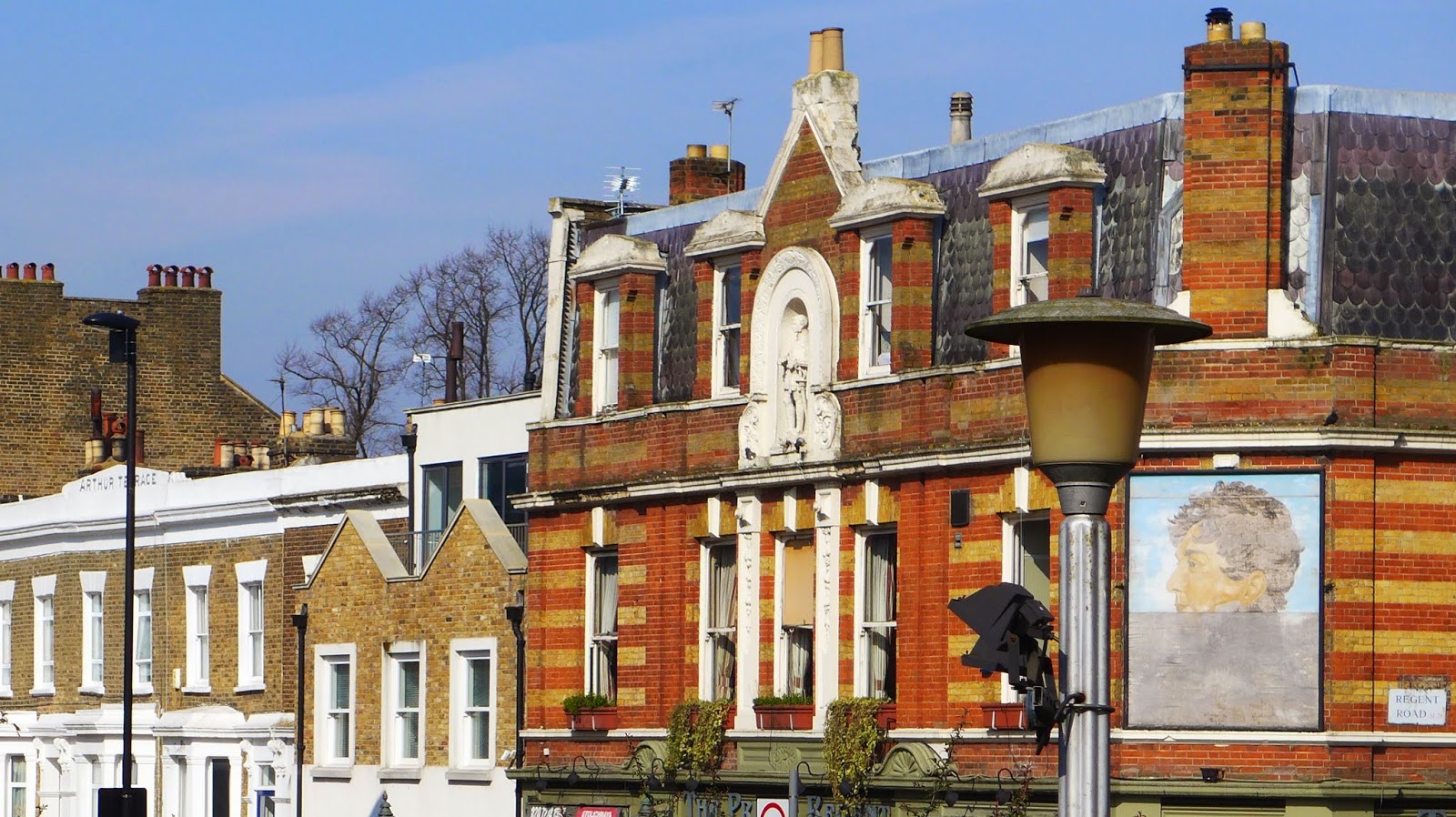 Opposite Brockwell Park and stranded half way between Brixton and Herne Hill, the Prince Regent is an inviting and popular gastropub that has a stylish, chilled French vibe. It has outside tables, in the shadow of two stocky antique lamp posts, while light floods in through the large windows into the cosy, Victorian wood-panelled bar adjacent to a cosy dining room with an array of big, sturdy wooden tables. The laid-back atmosphere is accentuated by the newspapers, the well-thumbed books and the pile of board games. On draught are a couple of real ales, plus a handful of well-known lagers, such as San Miguel (£3.50 a pint) and Becks (£3.10). If you want something soft, the cloudy apple juice is good and is served with a slice of apple wedged on to the glass. 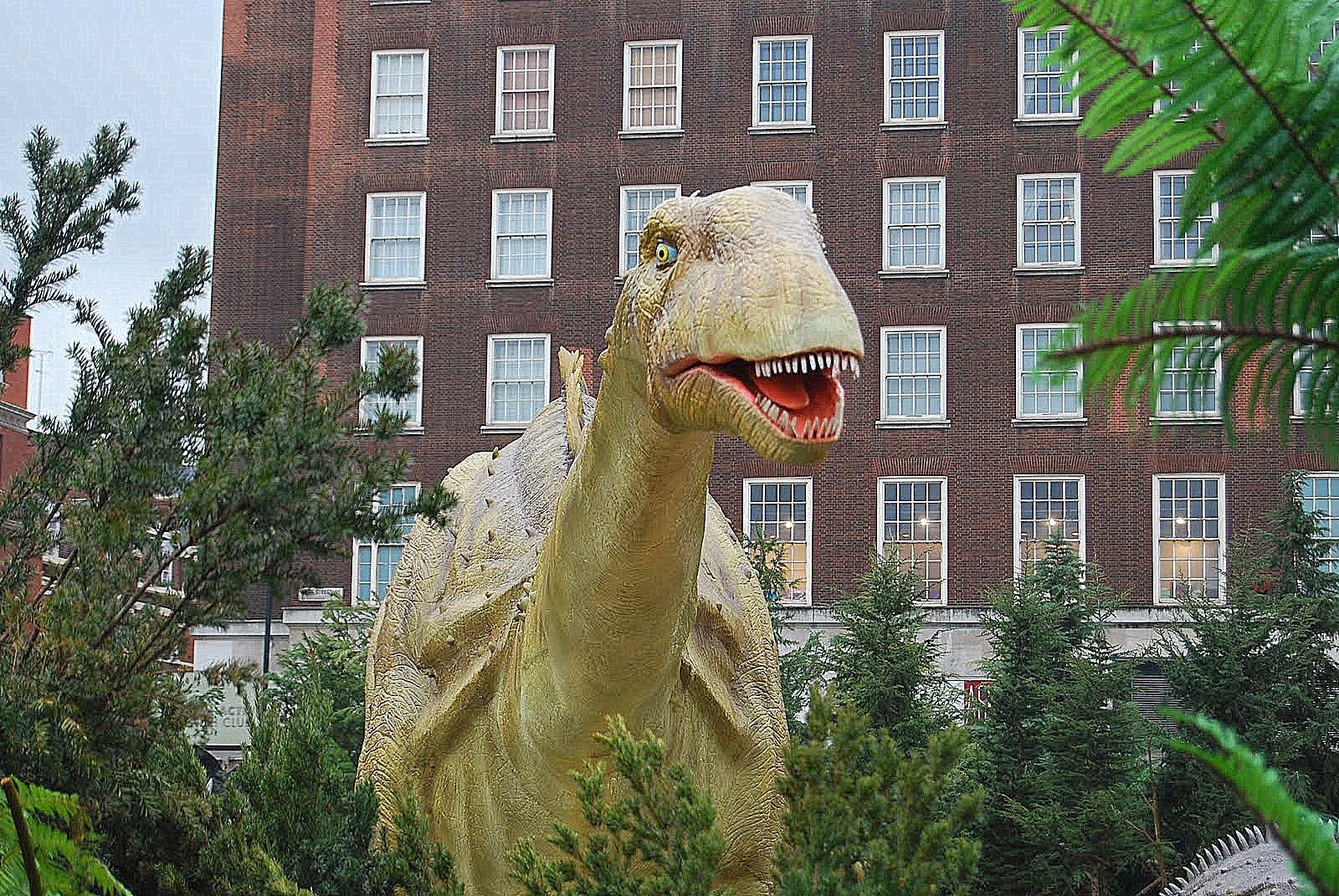 Inside a massive marquee on a building site opposite Selfridges grandiose department store, a tyrannosaurus rex raises his head and swings his tail, roaring every couple of minutes. Nearby, other, less intimidating, dinosaurs twitch and tremble, while excited kids and parents swarm around them. Outside, an enormous diplodocus, longer than a London bendy bus, pivots its endless tail and neck, watched by a stegosaurus, a meglosaurus and a group of kangaroo-sized raptors. All together, Dinosaurs Unleashed showcases an impressive collection of about 20 animated model dinosaurs. But unleashed isn't quite the right word - they are generally glued to the spot and there aren't that many moving parts on each dinosaur. In some cases, the only sign of life is a beating heart. 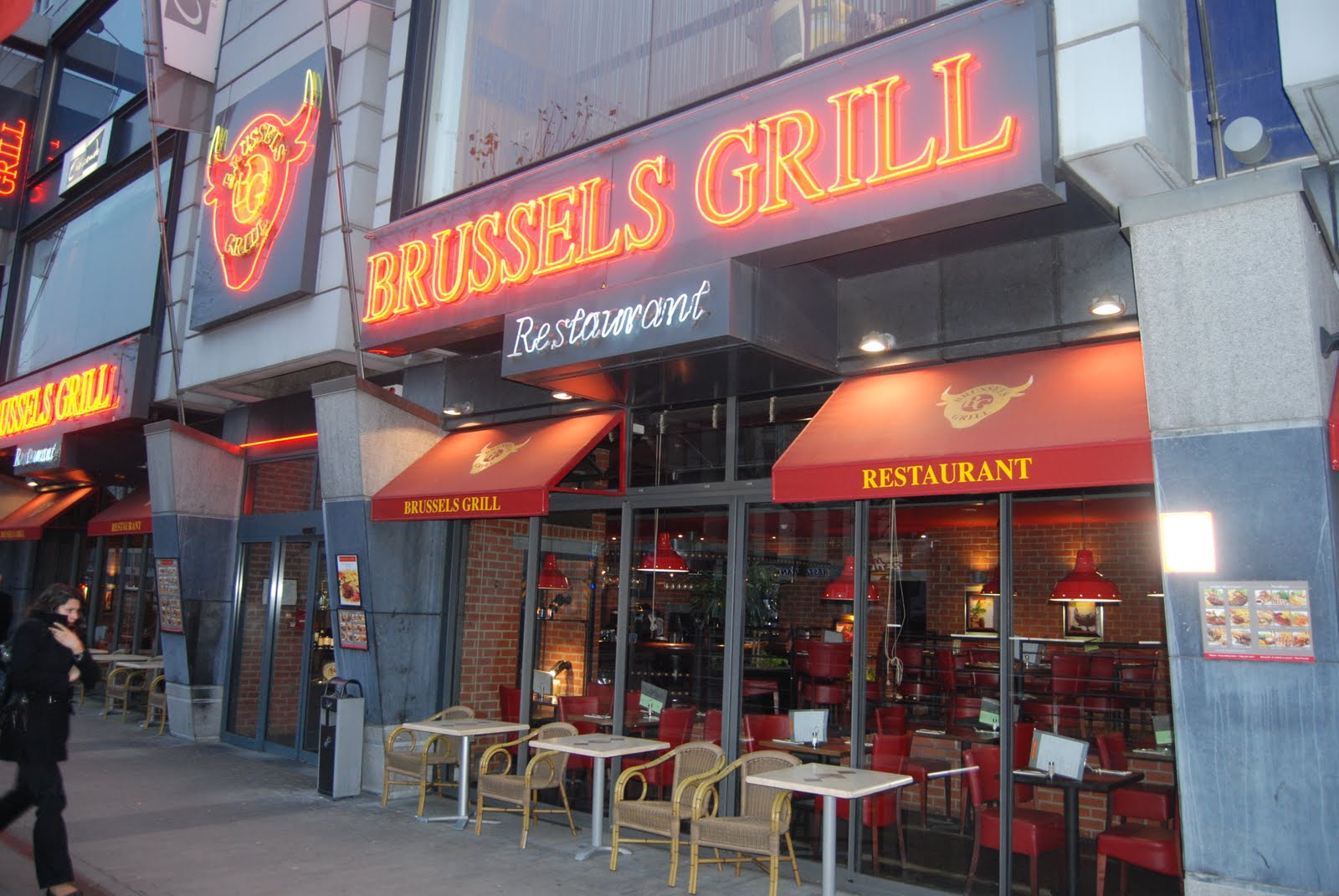 Surrounded by big hotels, the Brussels Grill's in-your-face neon signage and comfort food pulls in tourists and particularly business travellers by the dozen. There are plenty of closely-packed tables, but even on a Monday night, you may have to wait 20 minutes to be seated in amongst the legions of besuited executives. While you wait, you can have a beer (2.70 euros for a small glass of pilsner) at the compact circular bar. If you pay at the time, be careful it doesn't also end up on your table bill. The safe and static food menu, complete with photographs, leaves little room for imagination or daily specials.  Steaks, with chips and salad, start at about 16 euros before tax, but there are plenty of other staple dishes, such as grilled salmon and chips, caesar salad or spaghetti. The rich and filling stoofvlees (a Belgian beef stew with carrots, costing about 14 euros), also served with skinny chips, mayonnaise and salad, is a good choice on a cold, winter evening. If you have a couple of the decent free bread rolls, that will probably be enough to fill you up. An unashamed tourist trap, Brussels Grill is okay at what it does. 5/10 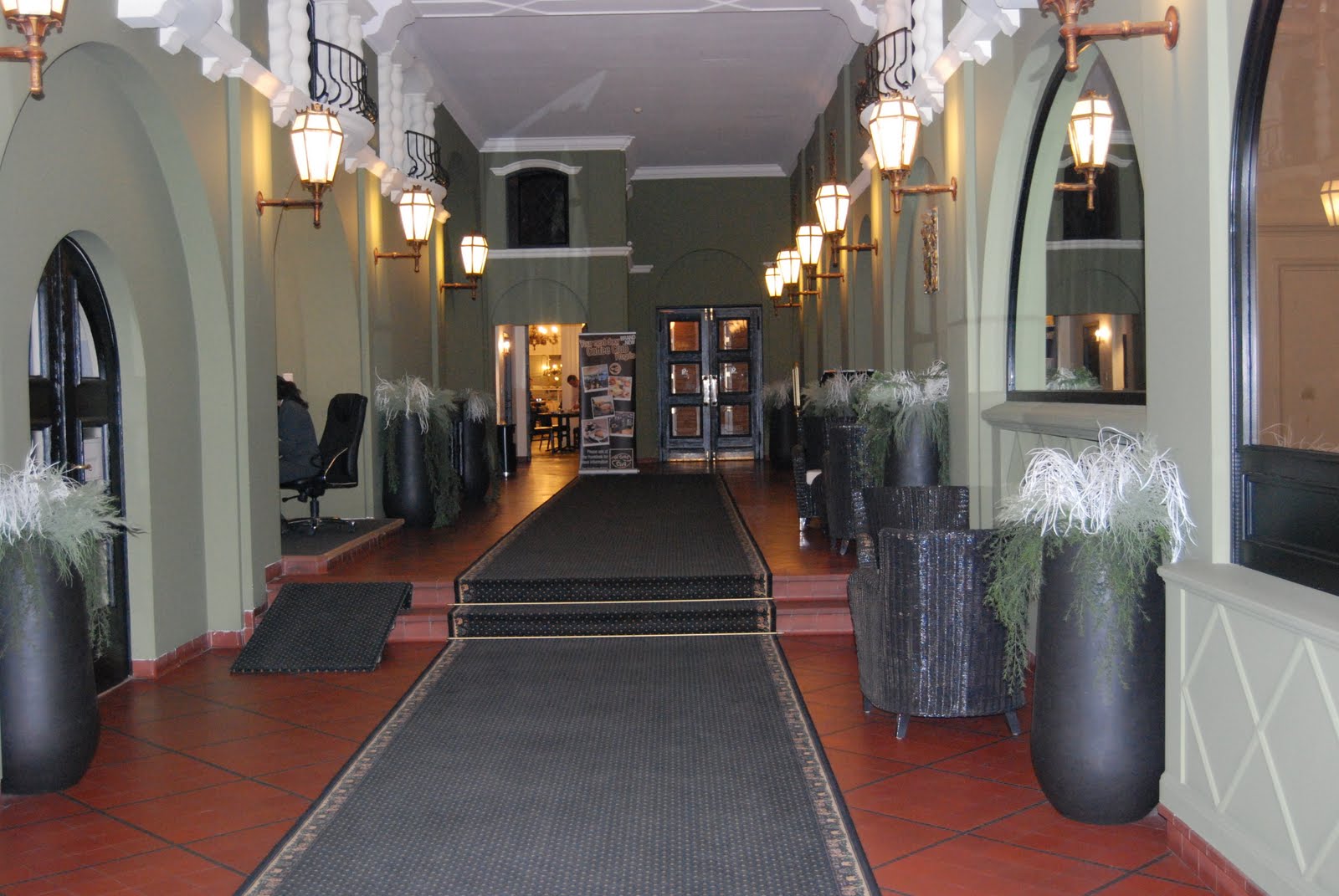 A keenly-priced, but rather dingy, 100-year old Brussels hostelry, the Hotel Des Colonies is well-positioned for business and pleasure alike. It is just over a kilometre from La Grand Place and a 20-minute metro journey, involving one change, from the European Commission's Berlaymont building. Inside, the long hall leading to the foyer sees little daylight, but still has some period character, such as the ornate mosaic fountain next to the reception desk. You can sit down here on one of the couches and use the free WiFi, which doesn't cover the guest rooms.