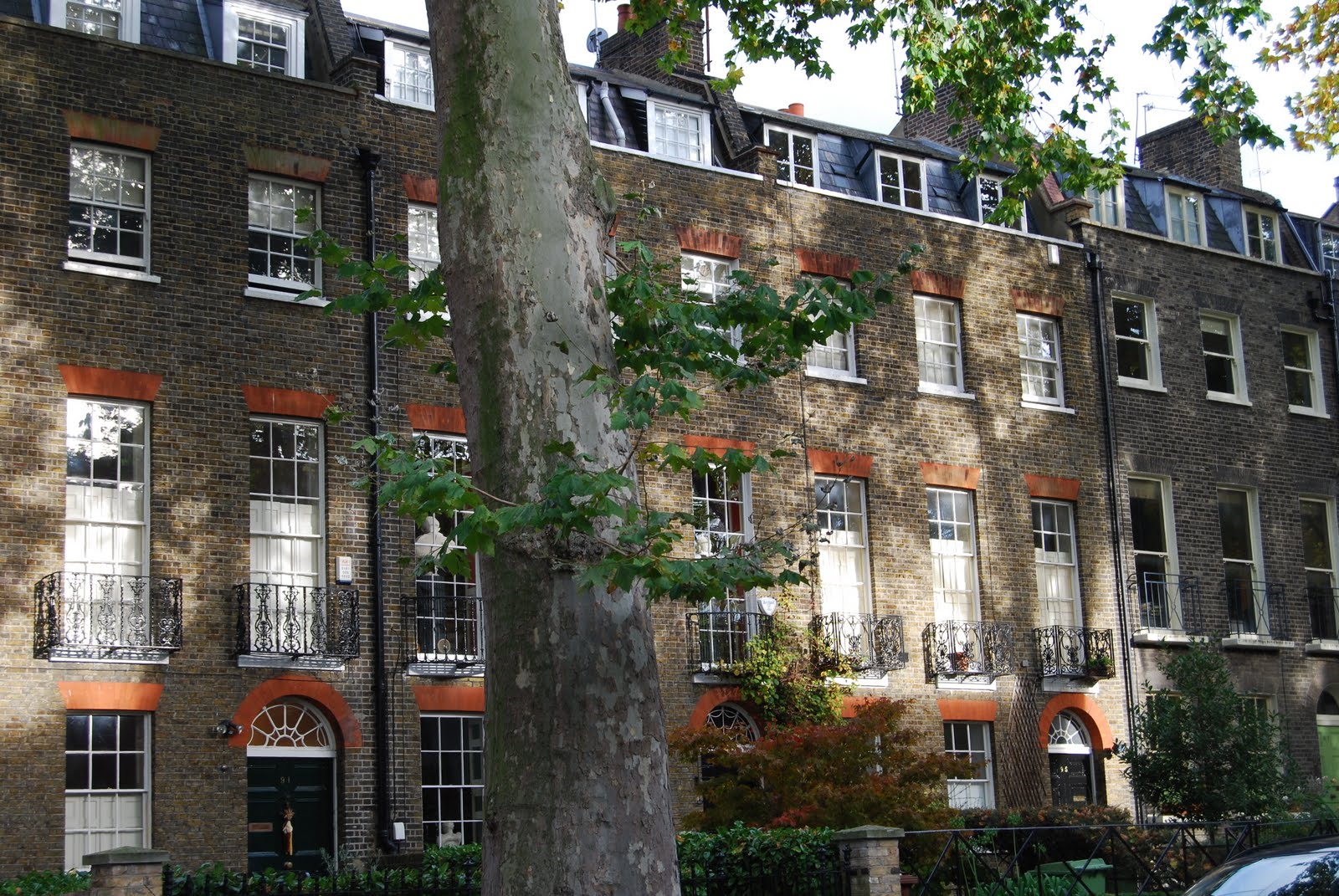 Running in a straight line for about a kilometre up hill from inner city Camberwell towards the more genteel suburb of East Dulwich, Camberwell Grove, lined with large mature trees shading distinguished eighteenth century terraces, is one of south London's most atmospheric roads. At the north end, a developer has sympathetically converted a Victorian school into apartments, while also building some imitation Georgian terraces alongside it. Further up the hill, the original four or five-storey Georgian terraces are interrupted by a small modern council estate, but much of the road looks pretty much like it would have done two hundred years ago. Towards the top, the brown bricks and cast iron balconies of the Georgian architecture give way to elegant Regency houses, painted various shades of white and, in some cases, pink. The grandest residences sit on Grove Crescent, a rough private road that curves around a wide grassy border next to the main drag. Camberwell Grove sees a fair bit of traffic, but it is calmed by a series of speed humps and some traffic lights, where the road is supported by a weak bridge over a railway line. Neighbouring Grove Lane also boasts a handsome eighteenth century terrace set well back from the road and partly hidden by very mature front gardens. 7/10 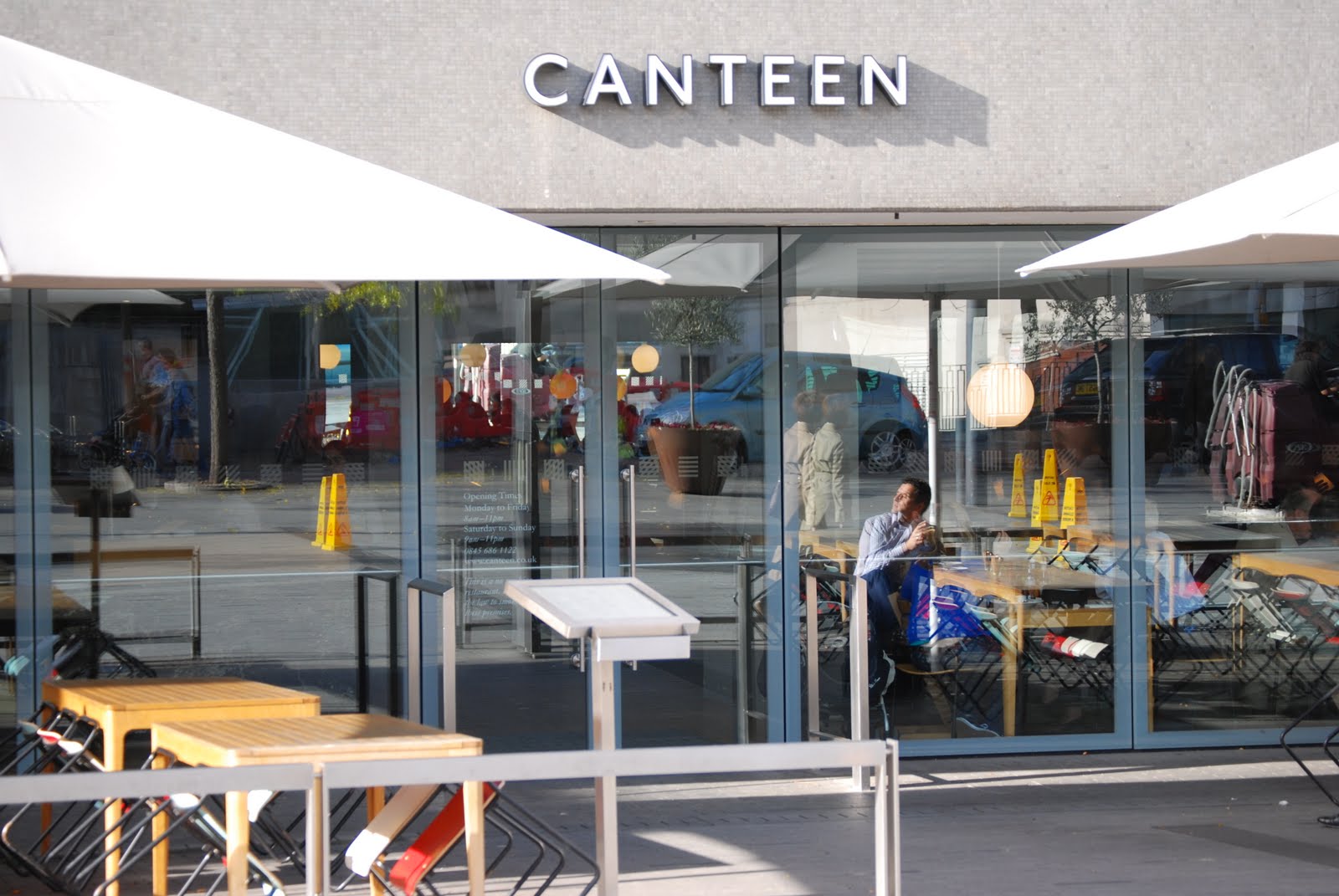 An onslaught of clean, modern lines and right angles, this branch of The Canteen, embedded into the back of the modernist Royal Festival Hall, has rows of sturdy wooden tables, mostly flanked by uncomfortable seats or benches with virtually no back to them. There are also tables outside sheltered by large parasols, but the floor-to-ceiling glass windows ensure that the interior is flooded with daylight. At pains to stress the authenticity of The Canteen's free-range ingredients, the menu is made up of unashamedly British fare, covering breakfast, lunch and dinner. Staples include a large leg and thigh of golden roast chicken with a great pile of chips and some garlic mayo (for about a tenner), smoked haddock, spinach and mash (£13) and walnut, tarragon and roast chicken salad (£9.50). The specials might include a modest chicken and mushroom pie, with light fluffy pastry, some delicious creamy mash potato and appetising buttery cabbage, for about a tenner. If you are still hungry, one of the classic deserts, such as treacle tart and cream, will set you back between five and six pounds. Coffees include a good, strong latte. Although service by the young multinational staff can be painfully slow and even forgetful, the fine food is good value and the The Canteen buzzes on a Friday lunchtime. 7/10 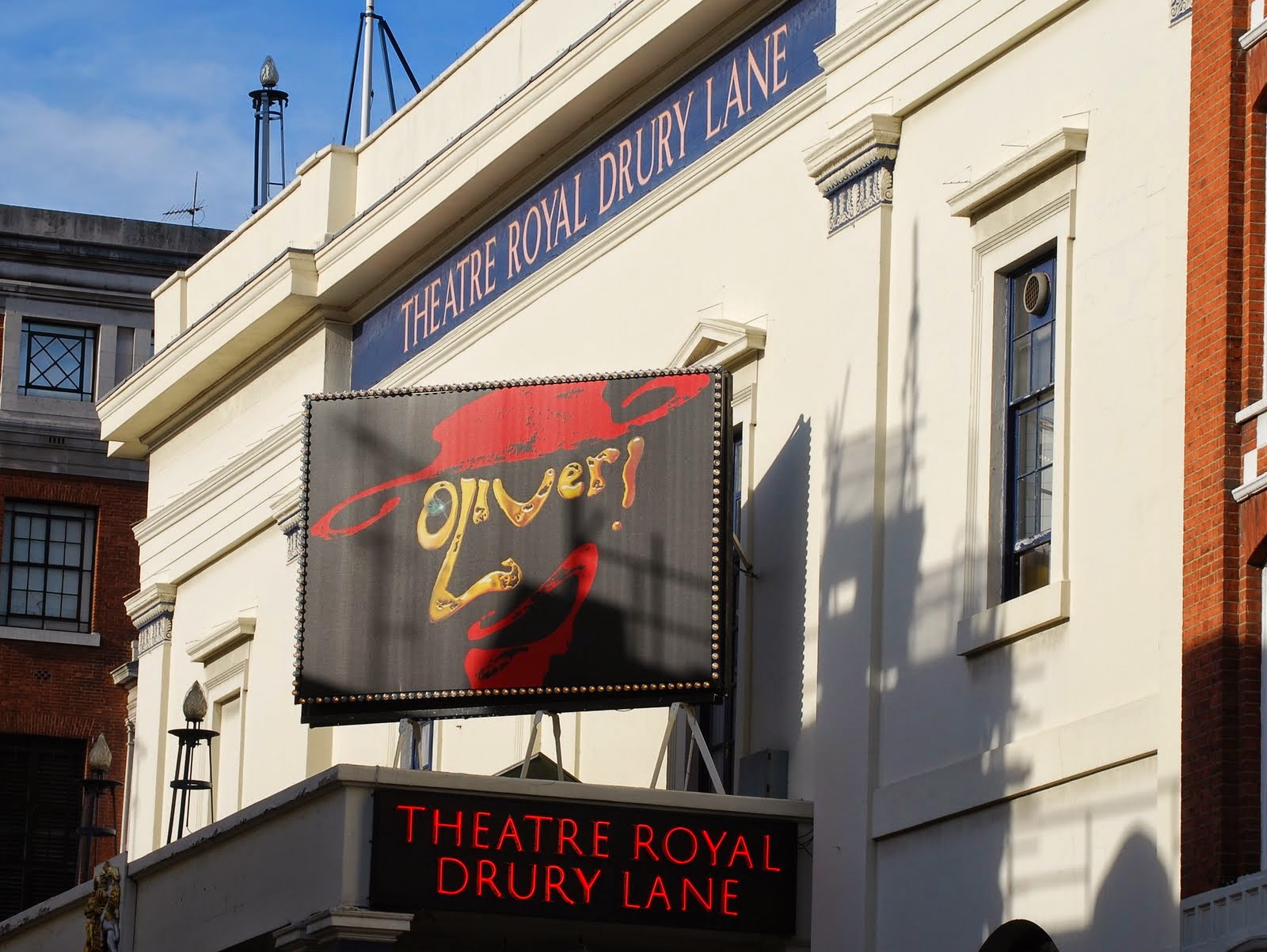 It would be difficult to ask for more from this extravagant all-singing, all-dancing production of Lionel Bart’s adaptation of Charles Dickens' renown novel about the grim underbelly of Victorian London. Together, the cast and orchestra number about 100 and, during the big set piece songs, such as Consider Yourself At Home, the stage is a whirling mass of carefully choreographed activity that will have you trying to watch four cameos at once. Some of the individual performances are also from the top drawer. Two parts humour, one part melancholy, British-Iranian comedian Omid Djalili, who has taken over from Rowan Atkinson, plays Fagin to near perfection. The comic noises Djalili makes in between sentences, his languid dance moves, mimicked by the smallest of his gang of pickpockets, and his rich repertoire of facial expressions will have you chuckling out loud. Another standout is Tamsin Carroll, the "alternative" Nancy, who has a fine voice, gusto and a fluid, convincing acting style. Ross McCormack is full of sparkling energy as the Artful Dodger and Steven Hartley's Sykes is hoarse, but suitably menacing. The standout scenes include a rousing chorus of Oom Pah, Pah amid the drunkeness and debauchery of the ale house and the amusing introduction to Fagin in his intricate, multi-level underground lair, which is a maze of cubby holes, adorned with rows and rows of silk handkerchiefs. 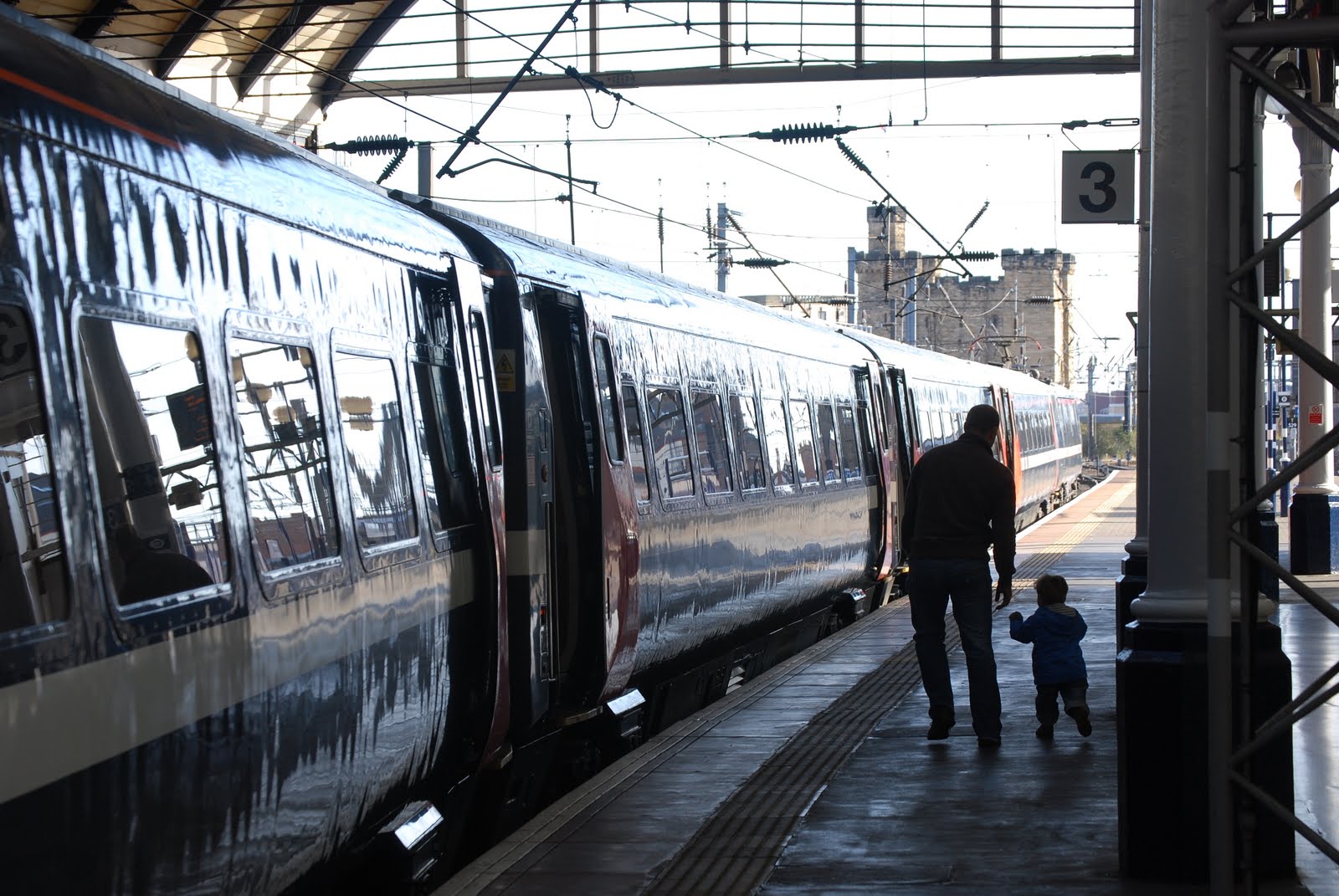 Book well in advance to get a reasonable price for a return ticket on the fast and busy east coast line from London, up through Peterborough, York and Newcastle, to Edinburgh. Fortunately, your advance booking comes with an automatic seat reservation or you might end up sitting on the floor in the luggage-strewn corridors between carriages. Although there are electric sockets next to most seats and free WiFi on board, the connection is intermittent as the train speeds its way north. The landscape on route is mostly flat and dull, there is no longer an on-board magazine and the drinks, snacks and mediocre sandwiches, available from the buffet car or trolley, are pricey. Still, the train is the fastest and most convenient way to get from central London to Newcastle. 6/10 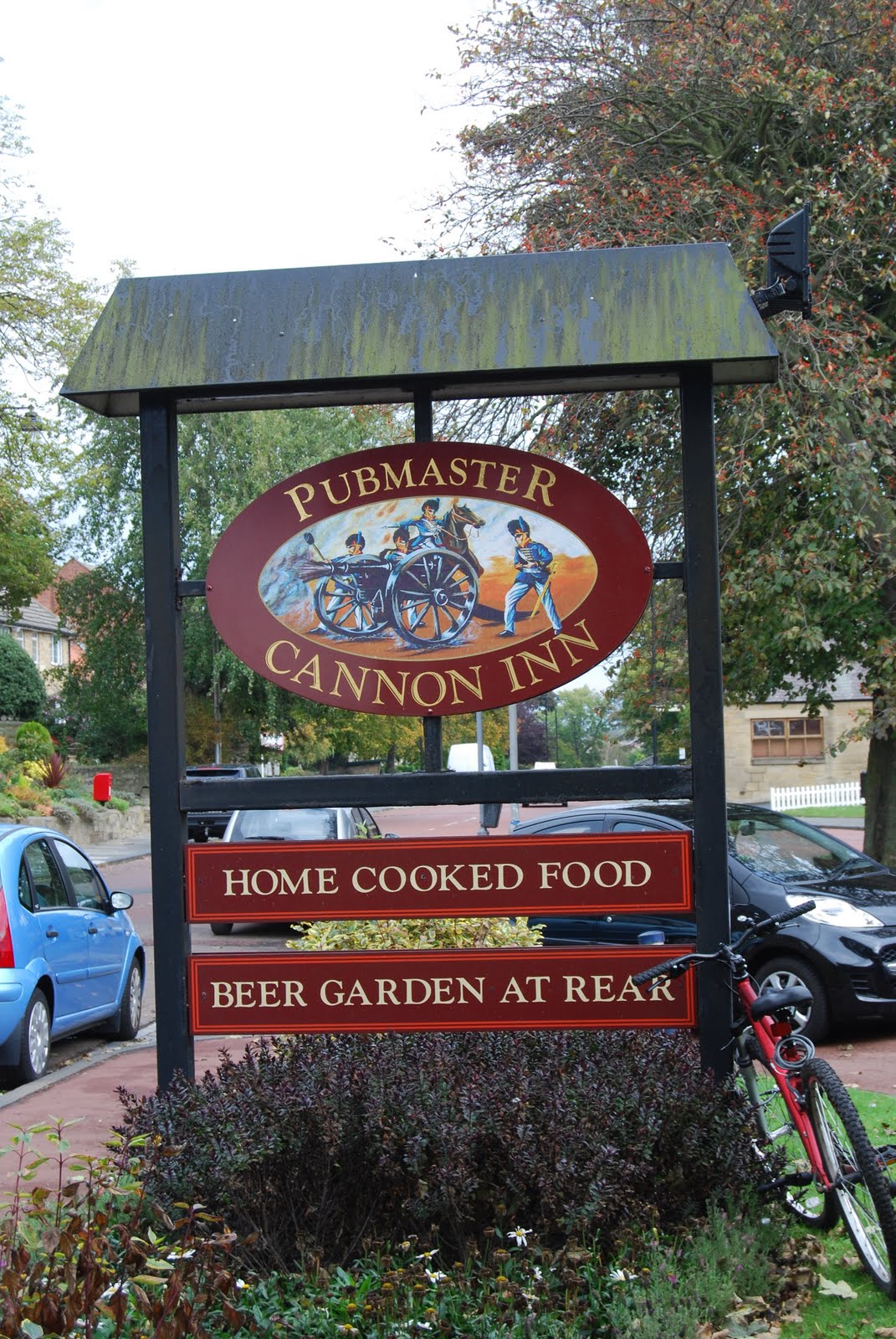 The Cannon is an old-fashioned, well-kept pub surrounded by stone nineteenth century houses, opposite a distinguished church in the endearing village of Earsdon. Inside, there is maroon upholstery everywhere, while the tables can be cramped and the stools small, so be choosy about where you sit. The walls are lined with prints of very dated paintings of pastoral scenes in ornate gold frames. But what pulls in the dozens of elderly regulars is the keenly-priced food and hand-pulled beers. The real ales include Directors (a fine, smooth pint) and Pedigree, while there is the usual array of lagers.

Proper mushy peas
Most of the main courses (around six to eight pounds) are served with a choice of chubby chips, decent new potatoes or a jacket potato. On a Saturday lunchtime, the corn-beef hash pie sells out quickly, but the hungry will find the mediocre Highland sausages, served with melted cheese, bacon, proper mushy peas, onion rings and sweet corn, is quite an appetising combination. There are also several different variations on fish, chips and mushy peas. The fish tends to be wrapped in light and relatively-healthy batter, while the flesh inside is succulent. Or you can opt for a large, crisply-cooked baked potato with a prawn mayonnaise topping, a substantial side-serving of tuna, and stacks of fresh salad. There aren't any children's meals and, oddly, the staff insist that you pay in cash straight after your food arrives, rather than when you order. 7/10