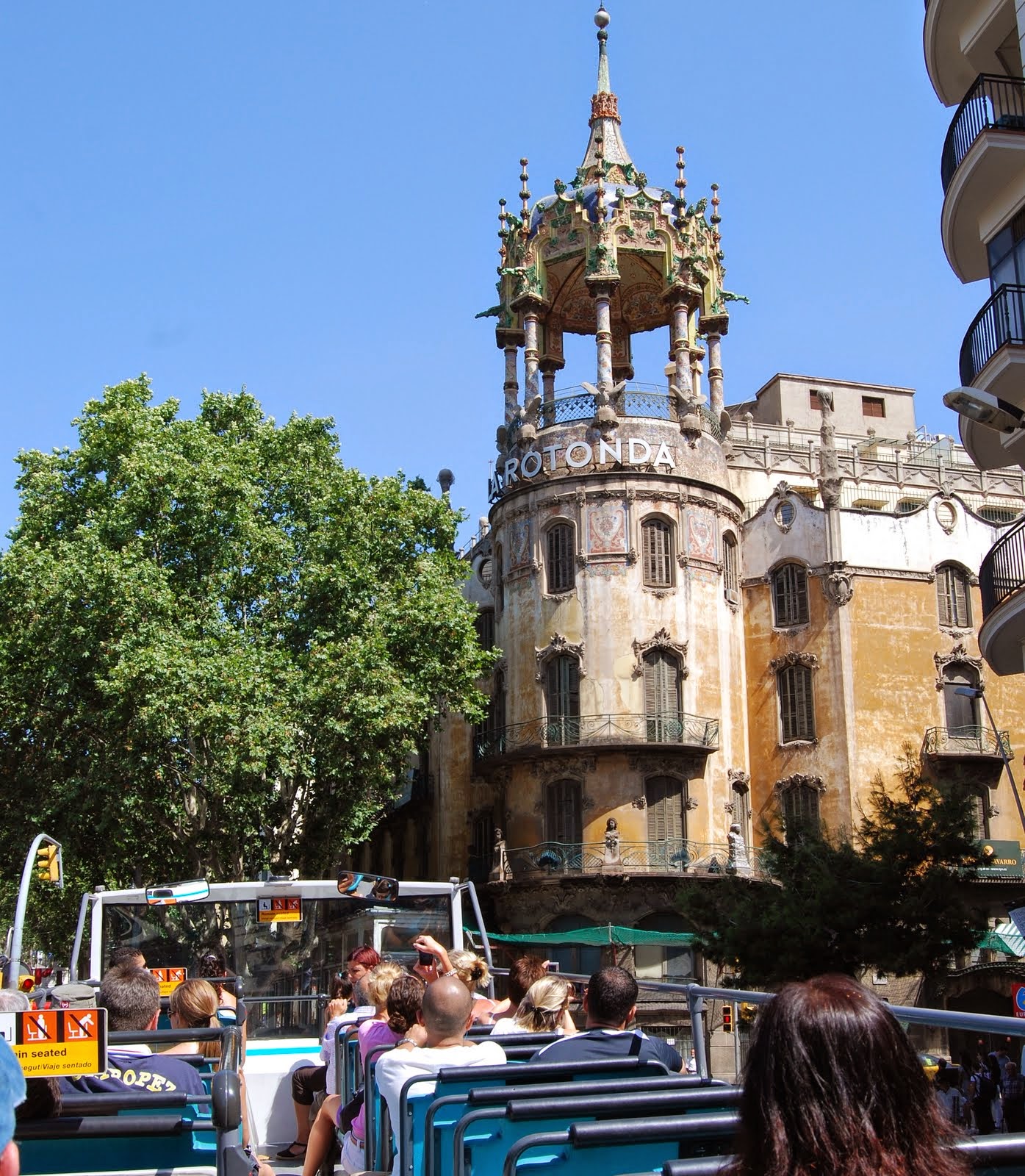 One of at least two outfits providing open top bus tours of the extraordinary city of Barcelona, Bus Turistic operates three different slightly overlapping routes, on which you can hop on and off as the mood takes you. The blue route covers off much of the inner city, crawling around the unremarkable Sants station before climbing up Montjuic to the grandiose National Palace and the 1992 Olympic venues, before heading down to the port and skirting around Las Ramblas and the beguiling Gothic quarter. The red route takes you to Gaudi's audacious modernist cathedral, the Sagrada Familia, before heading off north west to some of the sites on the edge of the city, such as the peaceful Gothic monastery of Pedralbes and the vast Nou Camp football stadium. The much shorter green route hugs the coast, taking in some of the modern architecture and sculptures redeveloped for and since the Olympics.


No shade, but good view
Unlike one of its rivals, Bus Turistic hasn't equipped its buses' top decks with any shade, but they do give you a good view of Barcelona’s elaborate and diverse architecture, particularly the many ornate and charismatic nineteenth century buildings in the Exiample district. In any case, at busy times, you may have to sit on the enclosed bottom deck until a seat comes free on the top. You are issued with a set of disposable earphones enabling you to listen to the enthusiastic, but limited and simplistic commentary, which is short on information and facts, interspersed with catchy, but very repetitive, music.

A whopping 21 euros
Prices are high - adults and teenagers have to pay a whopping 21 euros for a day ticket, while children under twelve pay 13 euros. At least you get a book of discount vouchers, offering a couple of euros off the entrance fee to many of the sights. The buses come round every ten minutes or so and, in the hot summer months, these tours make sight seeing with young kids just about doable. But they can be a slow way to get to specific districts – you may only travel in one direction, so it often takes a long time to get to where you want to go. Moreover, some major sights, such as the imposing Arc de Triomf and Gaudi's fantasy Park Guell, are at least 10 minutes walk from any of the routes. 5/10