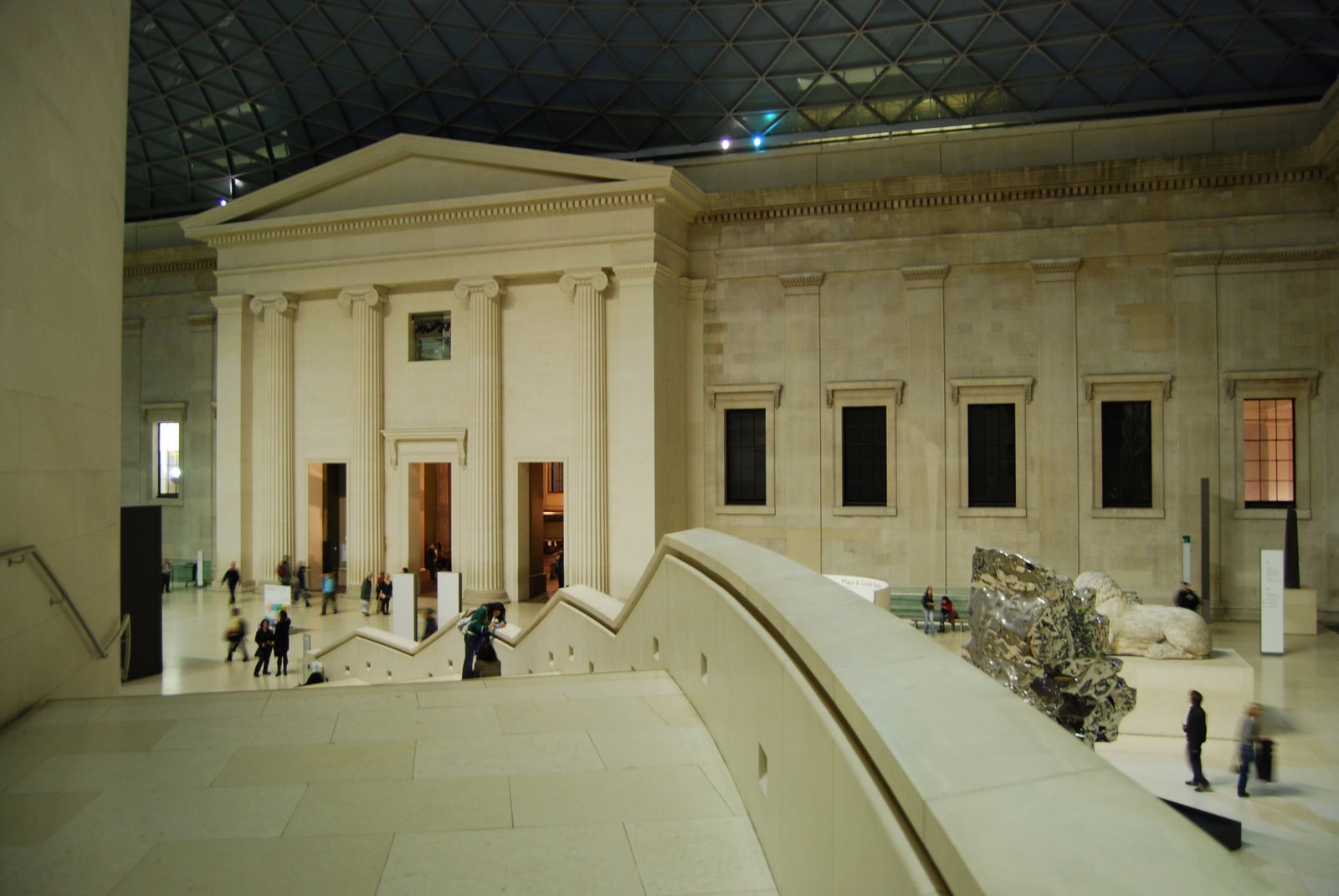 The mother of all museums, the British Museum is an imposing and vast neo-classical building surrounded by the Georgian terraces and squares of Bloomsbury. The hordes of visitors are initially sucked into the striking Great Court - a large rectangular space covered by a glass roof and surrounded by cream-coloured classical facades with doorways leading into the scores of galleries packed with antiquities plundered from across the ancient world. In the middle of the court is a large, circular reading room flanked by broad spiral staircases leading up to a smart restaurant at the top. To the east are several charming and venerable wood-panelled rooms, dripping with a sense of adventure and history. Behind glass panels is a wide variety of objects, from stone age axes to eighteenth century medals, designed to show the breadth of the museum's collection. Beyond these rooms is the Paul Hamlyn library where children can pick up backpacks, which contain a series of activities based around a couple of galleries in the museum, or a colourful booklet detailing one of half-a-dozen trails, which mostly involve spotting particular artefacts.

The Wheel of Time, Robert Jordan

Eleven-volume fantasy saga set in an extraordinarily-detailed and vast medieval world embroiled in a struggle between the forces of light and the minions of the Dark One. The storyline revolves around Rand al'Thor, a grim young man endowed with massive magic powers, and some equally dour friends from his home village. They reluctantly get caught up in saving the world from the chaos being wrought by the "Dark Friends" working under cover everywhere from taverns to royal palaces. These locations and the vast cast of characters are described in painstaking and, often turgid, detail. But all this effort to create a believable world is undermined by contrived plot twists often brought about by seemingly arbitrary supernatural powers wielded by weird entities, such as the all-knowing Aelfinn who reside in another dimension.

Occasionally the pace quickens
Jordan goes to great lengths to give women a prominent role in the series, but after a couple of thousand pages or so, many of the heroines begin to merge into one - nearly all the females in the books seem to moan incessantly, fiddle with their skirts or fold their arms under their breasts. Occasionally the pace quickens as Jordan remembers to include some action and there is the odd gripping passage, such as the tense and atmospheric opening to the first book. A former military man, the author is at his best describing battles, skirmishes and bar room brawls in bloody detail. This still unfinished epic, which should have been half the length, needs a good editor. 5/10

A small and simple restaurant with maroon walls decorated with black and white framed prints of Vietnam, Mangosteen is a well-established eatery in Gypsy Hill. The menu features plenty of south east Asian classics, such as fish cakes, green curries and tamarind duck. To start, the four crispy golden dumplings, containing prawns and chicken and served with chili sauce, are spicy, crispy and exquisite. Alternatively, the steamed king prawns with asparagus, covered with a tangy lime and coconut sauce, are ultra-fresh. But they don't always arrive hot. Among the main courses, the beef pho amounts to lots of noodles and some lackluster slices of meat floating around in a huge bowl of liquid. It really needs the accompanying chili sauce. Packed with fresh, juicy prawns, mussels, pasta and salad, the seafood vermicelli is a better bet.

Two courses for ten pounds
Most of the main courses are around a tenner, while the starters are between three and five pounds. From Monday to Wednesday, you can get two courses for just ten pounds, but you pay a three pound supplement if any of your choices contain seafood. The wine list, starting at 12 pounds a bottle, includes some well-known French and Australian names or you can pay three quid for a modest bottle of Asian lager. There is also a service charge of 12.5%, but the courteous and friendly Vietnamese waitress earns it. In the summer you might want to dine al fresco on the outside terrace overlooking this fairly busy thoroughfare. 7/10 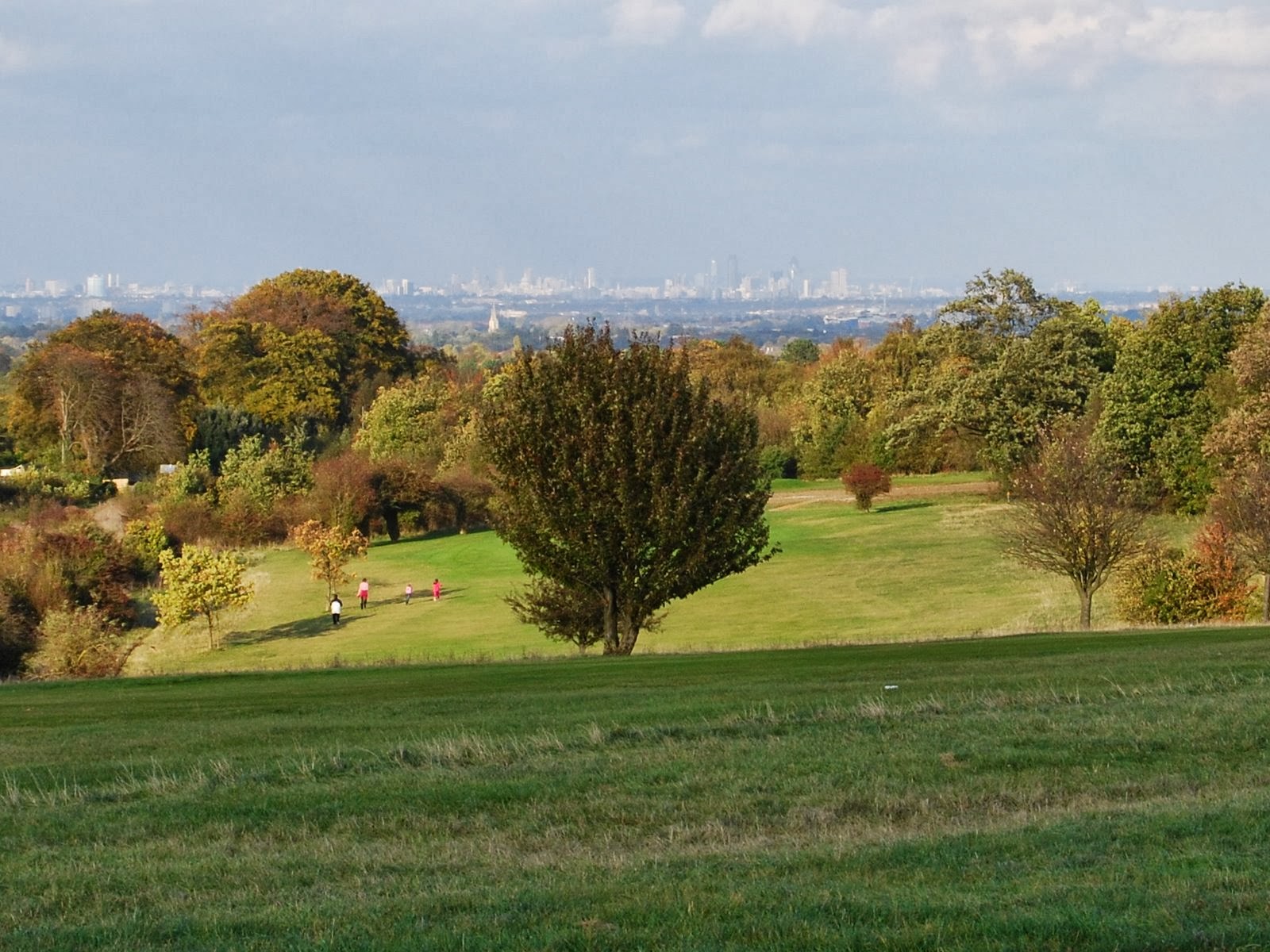 One of the best things about Epsom Downs, a stretch of rolling downland on the edge of suburbia, is the view north from the car park on the crest of the hill. The dome of St Paul's Cathedral and the skyscrapers of the city shimmer in the distance far beyond the golf course hugging the hillside. To the south, is the glistening white grandstand of Epsom race course. After crossing the road, an underpass takes you to the other side of the race track where an undulating path leads across the grass. Above you, model airplanes may be doing loop-the-loops, while kites dance elsewhere in the sky. 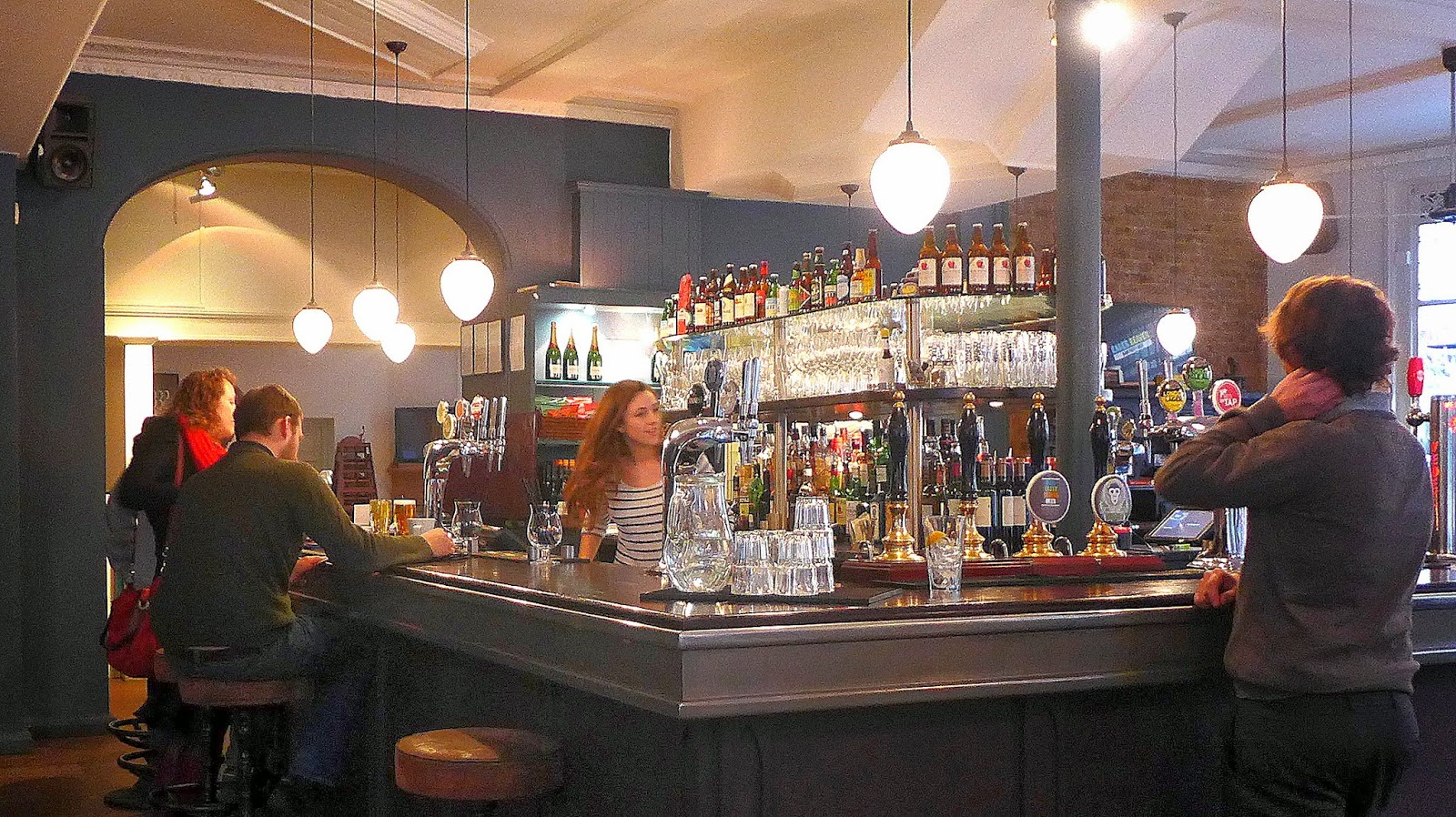 A large pub the size of a village hall, with funky decor and funky music, hip, young staff and its own micro-brewery. The Florence's focal point is a 'Cheers-style' square bar, serving an impressive range of premium beers, including the German wheat beer Erdinger and the renown Czech pilsner Budvar. Each tap around the bar has a small label describing the beer to the uninitiated. But the tangy Weasel ale, brewed on the premises, must be an acquired taste. Head for one of the tables, flanked by comfortable brown sofa-pews, near the large front windows as the conservatory at the back is less inviting. There is free Wi-Fi and iced tap water, the bar food is pretty good and reasonably priced - you can get a deep, juicy steak burger with blue cheese mayo, plus some fat salty chips with a garlic dip, for a tenner. Quiet during the day, before coming to life in evenings when the Florence buzzes with a lively mix of local twenty and thirty somethings. 7/10 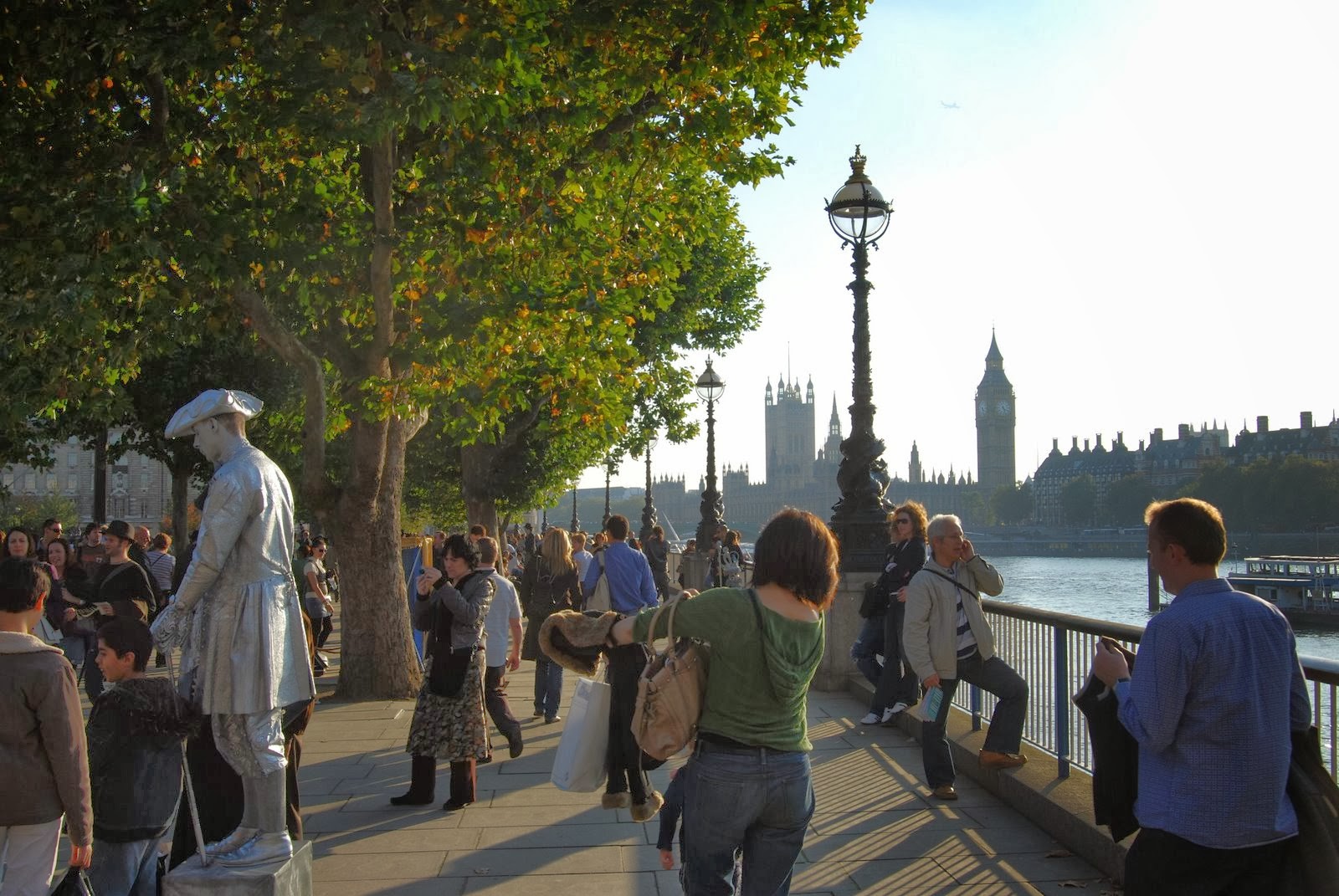 A riverside promenade, heavily-redeveloped in the 1950s and 1960s, stretching between Blackfriars Bridge and Westminster Bridge, the South Bank is lined with tourist attractions, restaurants, bars and cultural institutions. Sturdy black vintage lamp-posts intertwined with serpents punctuate the fine views of the handsome buildings on the north bank of the river, including the neo-Gothic splendour of the Houses of Parliament. Near Blackfriars, the narrow walkway can get uncomfortably crowded on summer weekends, especially around the Art Deco Oxo Tower renown for its top-floor posh restaurant. 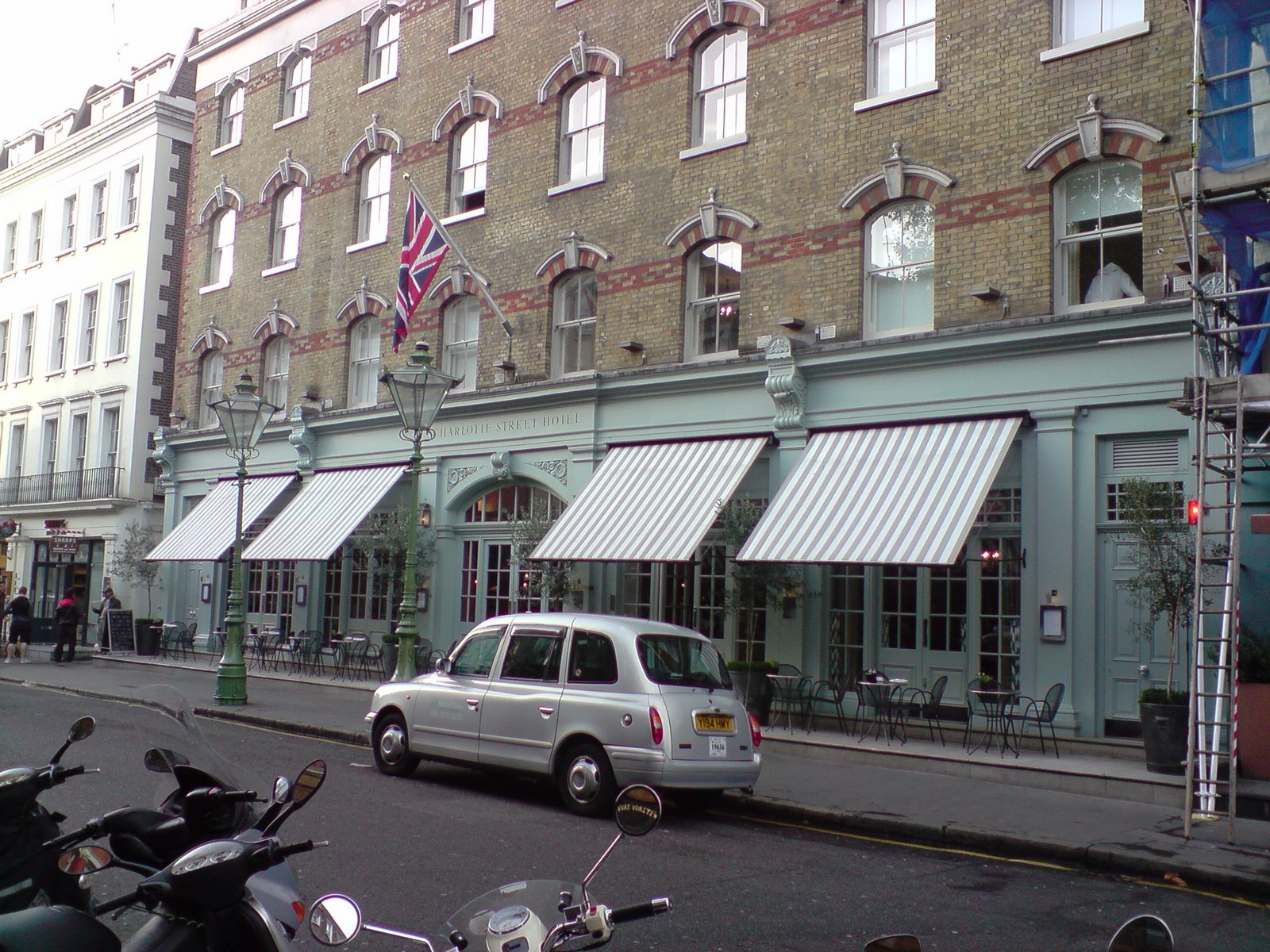 Stylish, boutique hotel housed in an elegant early Victorian building with a pale green facade and awnings, guarded by a pair of matching vintage street lights. A pricey breakfast is served in Oscars bar, notable for its resplendent, technicolour wall paper. You can choose between the slightly uncomfortable, low-slung chairs and circular tables near the windows or the more formal dining area at the back of the bar. Even if you skip breakfast, a smallish cup of filter coffee will set you back four pounds. Still, it does come with a biscuit. On a weekday morning, Oscars is three-quarters full with well-heeled media types and unusually fashion-conscious business executives. Pricey, but good for people watching. 7/10

Slightly surreal and highly unusual, Pero is a heady mix of puppet-show, play and musical set in an Italian village performed by a Dutch theatre group in English and aimed at children. It opens with the self-confident Sun (Annemarie Maas) and the mournful, but melodic Moon, (Guus Ponsioen) playing their keyboards and narrating, mostly in song, the life of Pero the baker and his next door neighbour Colombina, who runs a launderette. The neighbours, small childlike puppets, are controlled by the flirtatious, energetic and charismatic Inez de Bruijn and the more workmanlike, but still engaging, Timmy Velraeds. The tragic-comic storyline is echoed in the performers, garish, almost clownish, makeup and grey attire.

Embellished with charming details
While the lyrics are often amusing and absorbing, the script has its idiosyncratic moments, such as the strange repetition of the reasons why Pero and Colombina's childhood friendship hasn't blossomed into an adult romance. The music, composed by Guus Ponsioen, is mostly variations on one captivating melody performed in a series of musical styles from folk to opera. Maas' vocal talents are more than equal to the challenge. Half way through, the performance changes pace with the arrival of the amorous house painter Palantino. He wisks Colombina away on a honeymoon in the countryside, which emerges from a large black box rather like a page in a pop-up book. Pero is embellished with charming details, such as the steam that rises out of the bakery chimney and the fluffy rats that overrun its cellar. Although the performance only runs for an hour, you can get both adults and kids tickets at the Unicorn for as little as a fiver apiece. Produced by Speeltheater Holland, the overall effect is enchanting. 8/10 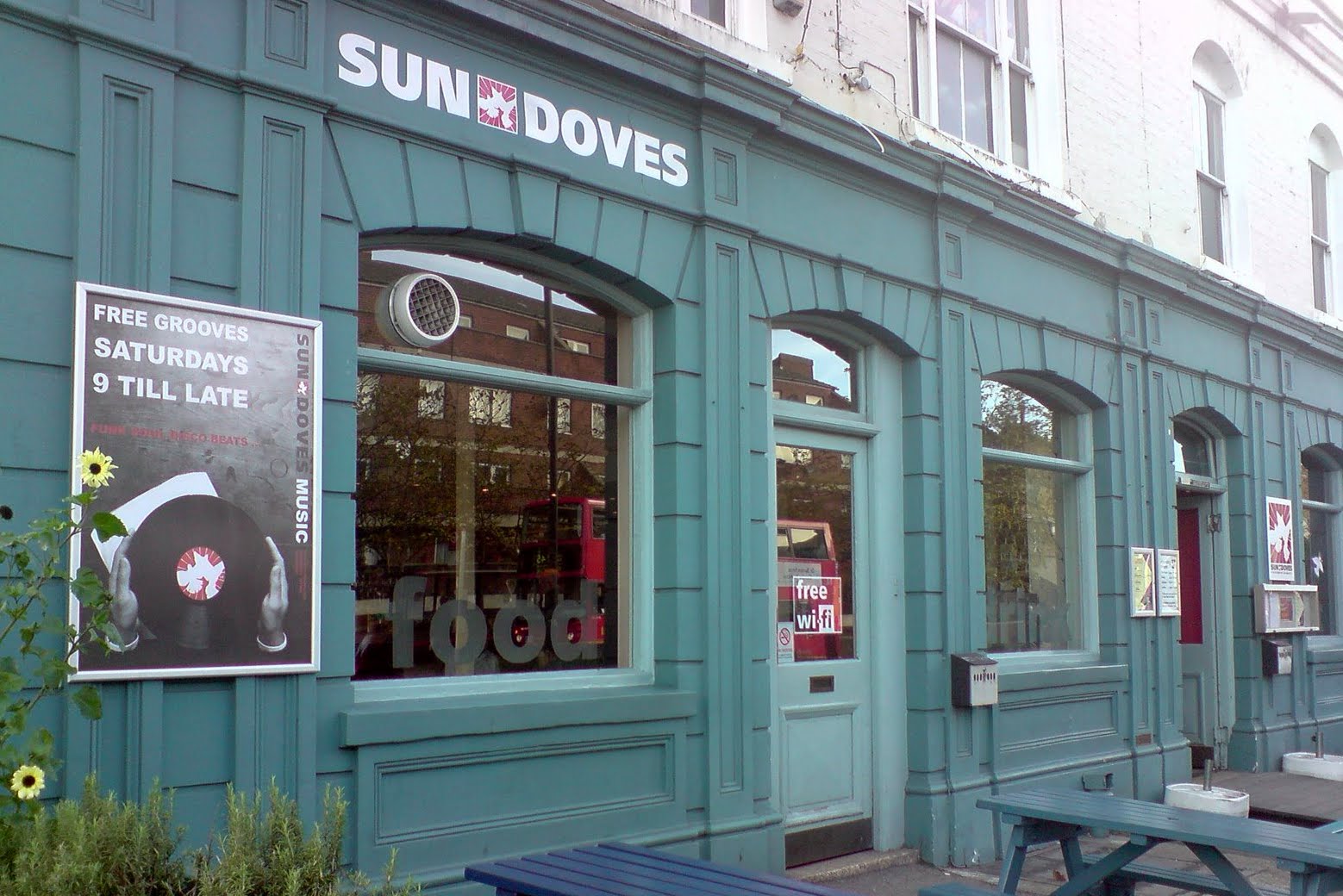 Just round the corner from the sprawling King's Hospital complex, the Sun & Doves draws a steady flow of medics on weekday lunchtimes. Inside, the spacious bar has an eclectic, but stylish, decor, an attractive black stone floor and cosy corners with leather sofas, books, televisions and a collection of videos. On the walls is an odd mix of prints and African-style art, including some narrow, painted shields, and the chill-out music is loud and moody. Out back, is a large patio with its own collection of quirky art and artifacts. You can soak it all up while surfing the Web via the free Wi-Fi. The Sun & Doves menu, which includes salmon fishcakes (£8.50) and rump steak (£9.95), is straight out of the gentrified pub playbook. There are also some cheaper staples, such as burgers, soup and sandwiches. The cream of mushroom soup contains some strange stringy bits, but is well seasoned and has some flavour. There is a generous filling in the avocado, bacon and chicken toasted sandwich. You can get the soup of the day and a sandwich (just two rounds of bread) for £5.90. The Americano coffee (£1.70) is strong, but on the small side and watch out for the optional service charge of 10%. 7/10 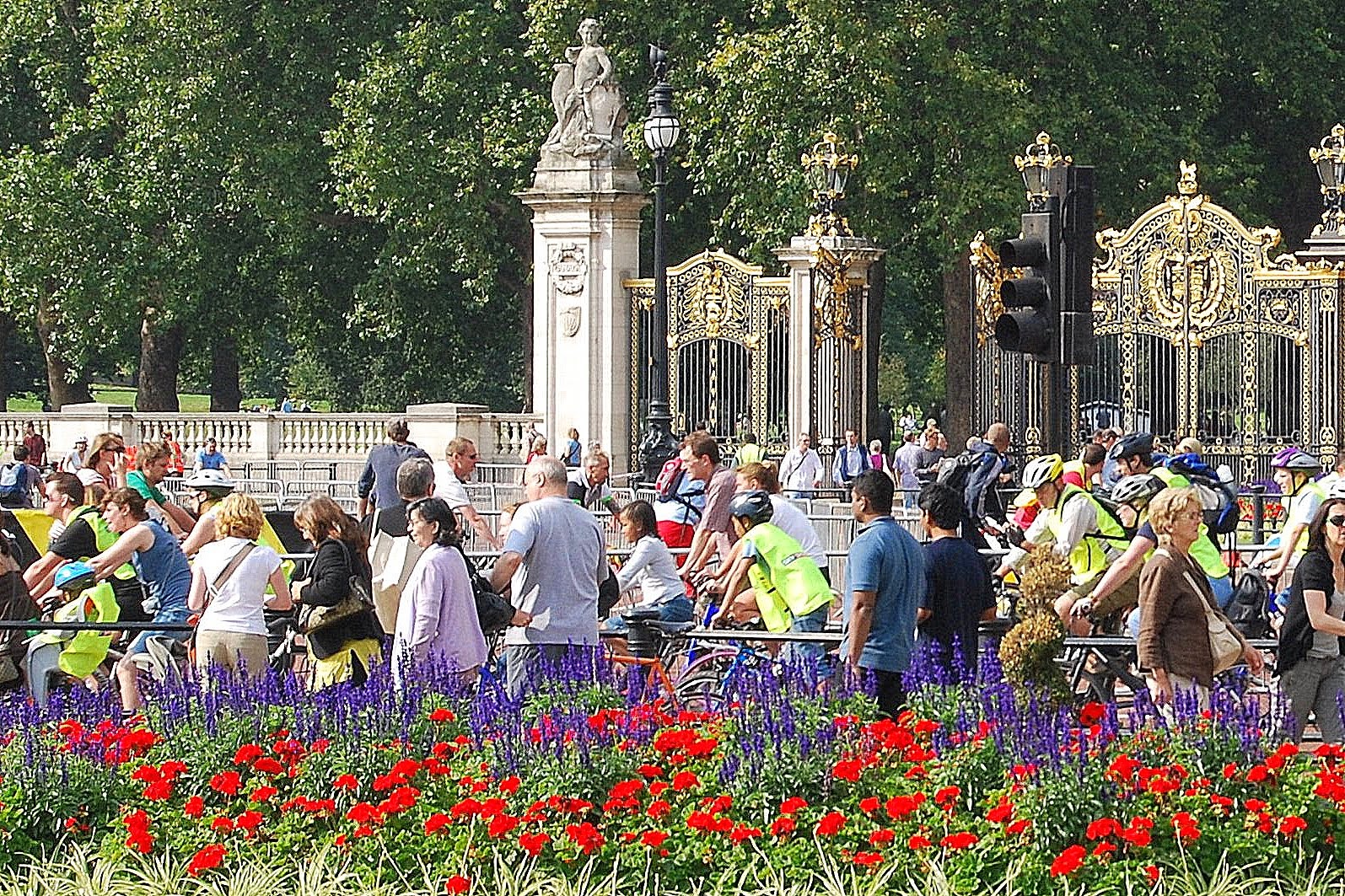 On one Sunday each year, some of London's finest roads are closed to traffic to enable thousands of cyclists to follow a 6km route between Buckingham Palace and the Tower of London without dodging cars, buses and lorries. Londoners of all shapes and sizes, some in fancy dress, turn up on everything from hunking mountain bikes to sleek racers to unicycles. But the absence of cars doesn't mean they can finally jump red lights legally - stewards, holding stop and go signs, patrol pedestrian crossings, enabling the thousands of spectators to criss-cross the route. Still, cruising around the grandeur of Trafalgar Square surrounded by scores of fellow cyclists is quite an experience. Would-be cyclists wishing to ride the route are supposed to register first, but it doesn't appear to be well enforced.