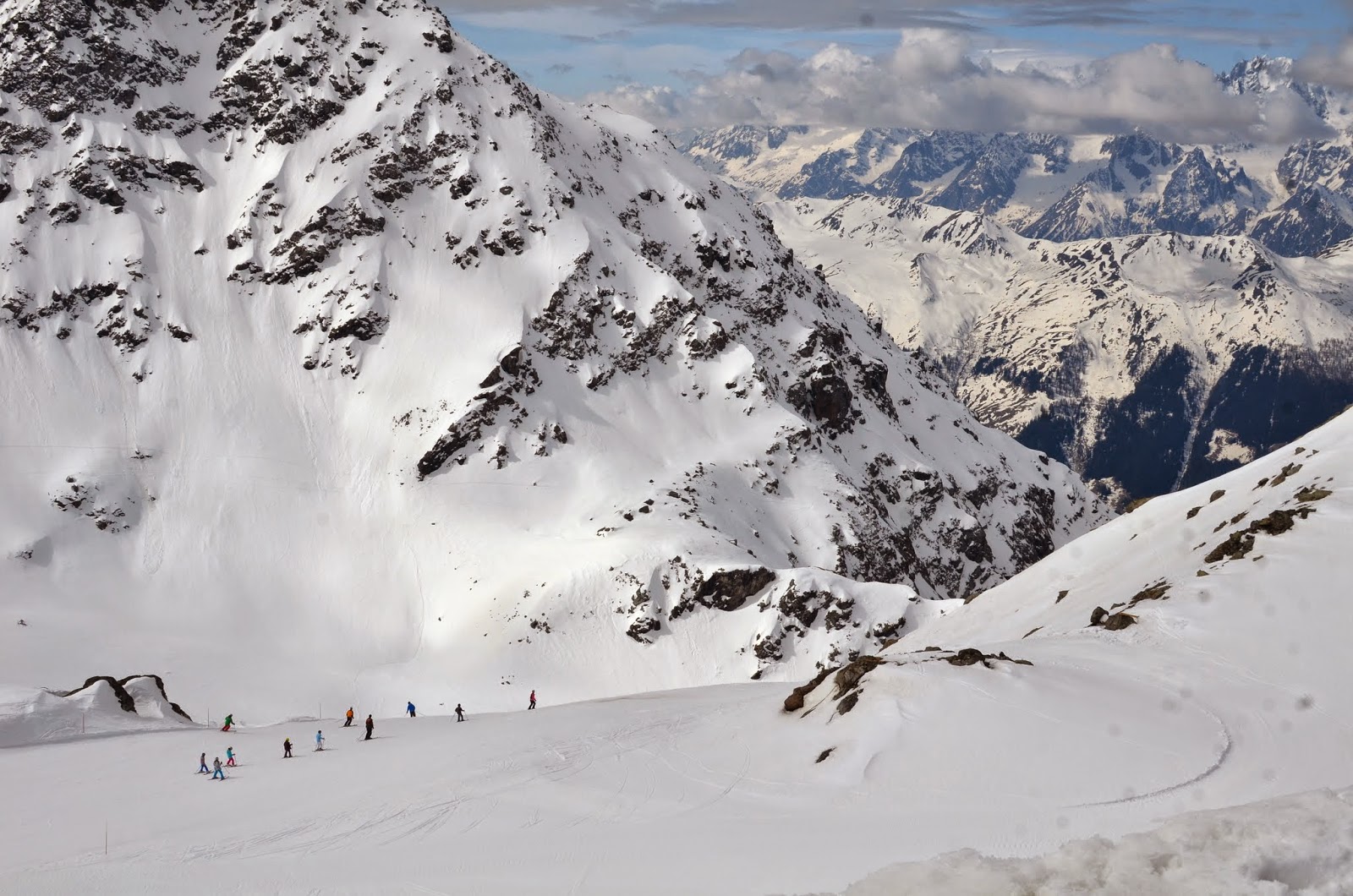 Renown for its upmarket nightlife, the smart Swiss ski resort of Verbier still has something of a buzz in the second week of April. Although many of the chalets stand empty and you can walk straight on to the Medran gondolier, the sun terraces of the town's bars can still get busy come 4pm. Most of the pistes face south, so if you want half decent snow at this time of year, you need to stay above Les Ruinettes station at 2,200 metres. Up here, there are several wide sweeping red runs from the Attelas and Fontanet stations. On the way down to Ruinettes, you can branch off towards La Chaux, from where you can catch a big cable car (3 Jumbo) up to Col Des Gentianes (2,950 metres) and the glacier. The 150 capacity cabins seems to leave every 10-15 minutes, but it is worth the wait. Up here, the views are tremendous and the challenging red run down to La Chaux can be blissfully empty first thing in the morning. Many of the skiers wait for another cable car up to Mont-Fort, which boasts 360 degree views of 4,000 metre mountains. From here, there is a fiendishly steep black mogul run back down to the Col Des Gentianes station - not one for the faint-hearted.


In April, you'll see a lot of the Attelas station, which is almost snow-sure at 2,727 metres. From here, you can ski down into the lake area where there are a couple of fun reds, a blue and a straightforward black. A cranky old chairlift takes you up to Chassoure where a big yellow banner warns you that the route down to Tortin is for good skiers only. In the lake area, you can have some fun going off piste, doing little jumps and negotiating moguls. For speed freaks, there is a lively race track from Fontanet down to La Chaux and a timed straight run near Les Ruinettes. But Verbier lacks the kind of intricate forest trails you find in some ski resorts. Although there are some pleasant runs through the trees back down to the Medran, in April these can be slushy despite the best efforts of the artificial snow cannons. Aside from the main Medran station, Verbier also has a lift going up to Savoleyres (2,354m) and a cable car down to Le Chable, from where you can get a lift up to Bruson. But you may not want to risk these lower-lying offshoots in April.  Beginners will find themselves doing the blue between Fontanet and La Chaux over and over again.

Eating on the mountain is expensive and it can be tricky to get a table, which must get even harder in peak season. Still, in April, at least, you won't have to queue for lifts – most of the infrastructure is fast and modern, except for a couple of elderly chair lifts which can give your helmet a bit of a clunk when you bring the bar down. Verbier's hundreds of traditional wooden chalets, hotels and upmarket shops are connected to the Medran station by a network of free buses that run every 10 minutes or so until about 8pm. After that, you either walk or shell out for a pricey taxi. Served by a confusing one way system, Verbier's position on a steep mountainside makes it very picturesque. The overall effect is only marred by the excessive concrete around the Medran station and the sleek Hotel W.  8/10