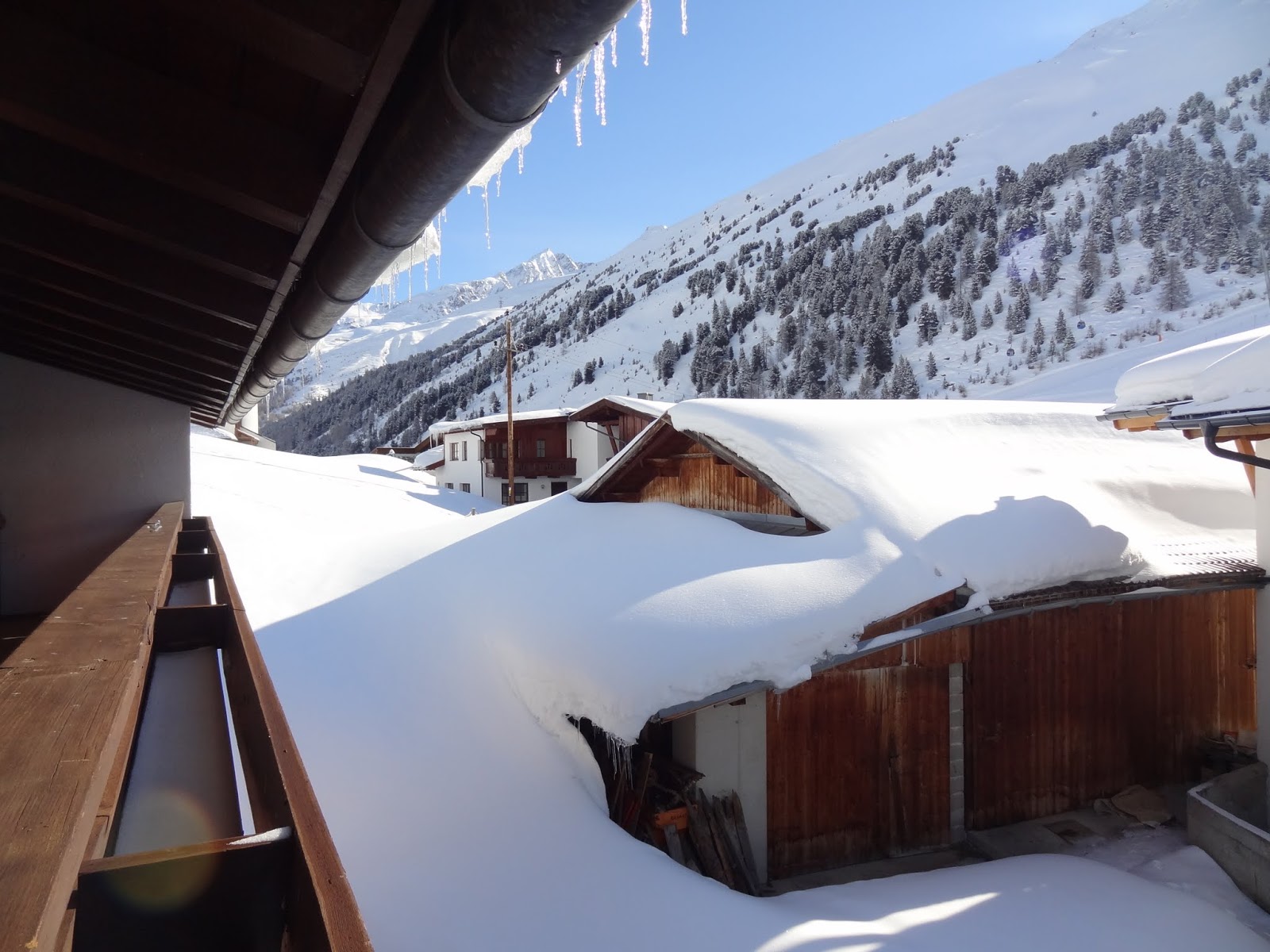 A four minute walk from the Festkogel gondola, Alpenblume is a well-located, but fairly basic, chalet-hotel in Austria's highest parish. It is taken over by Esprit, the British family ski operator, in the winter season, so its 20 or so rooms can be packed with families and the British staff tend to be in their early twenties.  Unless you are in one of the spacious suites in the new wing, the rooms can be pretty cramped and stuffy. Although they have (small) en-suite bathrooms and balconies, they can lack storage space, chairs and other facilities, such as a safe. The free Wi-Fi can also be very intermittent upstairs. Still, the communal dining rooms, with their "Tyrolean knotty-pine panelling", and comfortable lounges, are pleasant enough. The continental buffet breakfast usually features some decent bread rolls and a fruit salad, but the rest of the spread can be mediocre - highly-processed cheese and ham, cornflakes, coco-pops. passable yogurts and fruit juices. Moreover, the filter coffee isn't great and you often have to wait. You can order porridge, but it doesn't get good reviews.


Moist homemade cake
Still, Esprit does provide well-run childcare (for under 13 year olds), allowing you to spend a carefree day on the slopes, having left the kids suited and booted for their morning lesson, at around 9.15am. They are given a supervised lunch and another lesson in the afternoon, finishing at 3.30pm. Not long afterwards, an impressively moist homemade cake, appears in the dining area. You can munch on a hefty slice of Victoria Sponge, berry cake, banana cake, chocolate cake or the like, while helping yourself to tea or coffee. Or you can buy a large bottle of beer (3.5 euros) from the honesty bar. A supervised tea for the children is served at 5.30pm. The adults' evening typically begins at 7.30pm with a couple of decent canapes, such as mini pizzas, lamb kofta and sesami toasts, and a very sweet aperitif, such as mulled wine.  While you socialise, a member of the Esprit staff sits on each corridor and listens out for any problems with the kids. When you sit down to dinner, you may be on a table with another couple or you can ask to join a group. Teenagers are supposed to join you for the three course dinner, which is accompanied by some fairly rough red and white table wines (such as Grenache and Chardonnay).

Well-liked by the kids
The mostly Anglo-French dishes at Alpenblume seem to be prepared by a professional chef (rather than the Esprit students) and tend to be reasonably good. Although the starter might be a tasteless, transparent soup, it could also be a flavourful tart or a moreish red pepper and tomato soup. The main course might be a well-cooked lamb saddle (you'll be lucky to get it medium-rare, but you might get a second helping) or some solid duck in a plum sauce or a precisely-cooked fillet of cod in a fine layer of batter. The protein is typically accompanied by potatoes or rice and respectable vegetables, served in terrines. The desert, which rarely goes wrong, might be a chocolate brownie or apple crumble with custard. On Wednesday, the staff have a night off, meaning you go out for a family meal. On a Friday, there might be a quiz after dinner, but most people head to bed around 10.30pm.

Bronze, silver or gold
The best things about the Alpenblume have to be its proximity to the slopes and the quality of the childcare. Both the chalet staff and the twentysomething, mostly British, ski instructors used by Esprit, tend to be well-liked by their charges and there is generally one instructor for every half-a-dozen children. On a Thursday morning, the kids each do a timed run, to a backdrop of music and an enthusiastic compere, and receive bronze, silver or gold medals depending on their time. On a Saturday, there are no lessons, so you can get a few pointers from the kids on how to ski Obergurgl's Magic Forest. 8/10